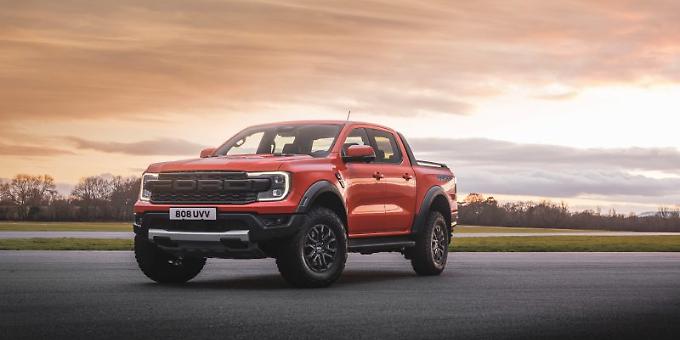 TODAY something for the true pick-up enthusiast — the all new Ford Ranger Raptor pick-up that sports a twin-turbo 3.0-litre EcoBoost V6, that in turn offers “phenomenal on- and off-road ability”.

And although those same enthusiasts will have a bit of a wait — customer deliveries will start in late summer of this year — if this is your thing it certainly looks like it is a vehicle worth waiting for.

Not only that but there is an electronically controlled active exhaust system that delivers engine sounds with four exhaust modes to “suit different driving scenarios”.

For any pick-up enthusiast, the Ford Ranger offers something special and has done so since it evolved from workaday pick-up to today’s super performing Raptor. In fact, the Ford Ranger nameplate has been used on multiple model lines of pick-up trucks sold by Ford worldwide.

The nameplate has been used for models worldwide since 1982 from the compact and mid-size pickup category.

The Raptor of 2022 then is a sophisticated beast compared with earlier models and it is claimed could literally go anywhere.

Just to make the point, the Raptor’s imminent arrival in Europe has been marked by a stunt video, which shows the vehicle leaping from a plane in order to make its European launch on time.

If it is the sheer “grunt” of such a vehicle — its massive torque (pulling power) — that might attract buyers then such fans will be interested to know the twin-turbo 3.0-litre EcoBoost V6 petrol engine has been tuned by Ford Performance to produce a targeted 288 PS and 491 Nm of torque.

The twin-turbo 3.0-litre EcoBoost V6 engine boasts a compacted graphite-iron cylinder block, which is around 75 per cent stronger and up to 75 per cent stiffer than the iron used in traditional castings.

Ford Performance has ensured the engine delivers immediate response to throttle inputs, and a race-bred anti-lag system similar to that first seen on the Ford GT road car and Focus ST enables rapid delivery of boost on demand.

“The 3.0-litre engine brings a different dynamic to the Ranger Raptor that will satisfy even the most hardcore performance enthusiast,” Dave Burn, Ford Performance chief programme engineer for the Raptor said. “The acceleration and raw performance of the new powertrain leave you grinning from ear-to-ear.”

The electronically controlled active exhaust system amplifies the engine note in four selectable modes. Drivers can choose their preferred engine sound by pressing a button on the steering wheel, or by selecting a drive mode that uses one of the following settings:

Quiet: prioritises quietness over performance and sound to keep the peace with neighbours on early mornings.

Normal: intended for everyday use, this profile offers an exhaust note with presence while not being too loud for street use. This profile is applied by default to normal, slippery, mud/ruts, and rock crawl drive modes.

Sport: offers a louder and more dynamic note and Baja — the most striking exhaust profile in both volume and note.

In Baja mode the exhaust behaves more like a straight-through system. This would be intended for off-road use only.

For the first time, Ranger Raptor gets an advanced full-time four-wheel drive system with an on-demand two-speed transfer case, combined with front and rear locking differentials — a valuable feature for off-road enthusiasts. Burn said: “While Ranger Raptor was inspired by desert racers, it’s also a supremely capable overlanding vehicle. Out of the box we’ve created an off-road vehicle that you don’t need to modify to get you where you need to go and back again safely.”

The Raptor also features trail control, which is like cruise control for off roading. The driver simply selects a set speed below 32kmh and the vehicle will manage its acceleration and braking while the driver concentrates on steering through difficult terrain.

Occupants will also benefit from the latest digital technology; the high tech cabin features a 12.4 in all-digital cluster and 12-in centre touchscreen.

Ford says the current 2.0-litre EcoBlue bi turbo diesel engine will continue to be available in the Next-Gen Ranger Raptor from 2023, with further details later.

MOTORISTS tend to associate the cars they have owned with a particular time of their life. The C3, ... [more]

THE electrification of Nissan’s range continues with dealers now taking orders for an advanced ... [more]

THE Jeep brand and Universal Pictures are teaming up once again, this time to launch Universal and ... [more]