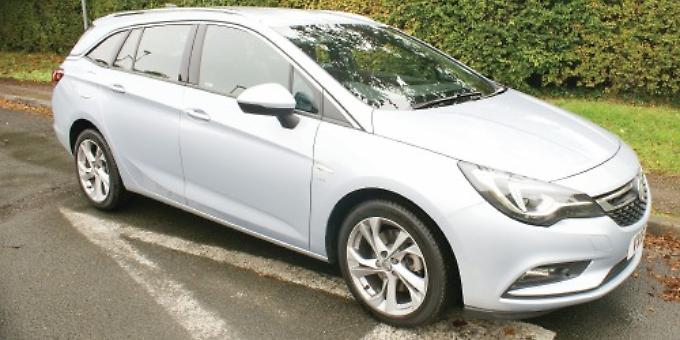 CRITERIA for the annual ritual of choosing the European Car of the Year are, as you might expect, specific.

Any new model (which must have been released a year prior to the award being made) is judged on design, comfort, safety, economy, handling, performance, functionality, environmental requirements, driver satisfaction and price.

Other important factors are technical innovation and value for money.

So it was interesting that this week’s drive, the Vauxhall Astra Sports Tourer, came with little badges declaring that this car was in fact European Car of the Year 2016.

Now I greeted all this as a breath of fresh air blowing in from the continent. After all with the hot breath of Brexit still breathing down our necks months after the historic vote, it was a comforting thought to drive a car still made in Britain (at Ellesmere Port in Cheshire).

Not that I’m one for any kind of jingoism: xenophobia and the like leave me absolutely cold because when prejudice raises its ugly head these days I think we have learned nothing at all in the seven decades since the end of the Second World War.

True, in the past I have not been the number one fan of Vauxhall cars, yet it is certainly something to write home about that the Astra beat off very fierce competition earlier this year to scoop this coveted award.

Not only that, but the Astra is part of a rather exclusive club of models that have actually won the European Car of the Year award twice (the Opel/Astra winning in 1985).

So with all that going on, you might have thought my expectations of driving the Astra were high.

As it happens, they were not. This was simply because, as usual, I adopted my stance of trying not to have any preconceived ideas about a car before actually driving it.

So the car I have been behind the wheel of this week was a Vauxhall Astra Sports Tourer SRi. This was a five-door model with a six-speed manual gearbox powered by a 1.6 CDTi engine.

The colour was smart and presentable and though livery monikers are often amusing (and meaningless), the Astra’s has to have the cutest around: Flip Chip Silver.

Anyway, I digress: ultimately I found this car something of a revelation. It drove extremely well with fluid, easy handling. The gearbox was great to use through all six gears and the power consistently available.

It was equally unfussed on motorways, where its high gearing at the top end gave it long and languid cruising ability. On A- and B-roads it was equally satisfying to drive and took the inevitable queues around town in its stride.

In short, everything you would expect from a car voted as the best in Europe. Even its cabin comfort, which I have had an issue with in the past, has greatly improved.

Another striking feature of this Astra Sports Tourer version is that it had a lot of internal space. This translates as roomy initial boot space that converts to a very useful carrying area when the rear seats are laid down.

That is what one would expect from any “estate” car, but in the Astra you get this important component in abundance.

Smartphone users are also able to connect their vehicle remotely with the OnStar app, MyVauxhall. This allows a driver to contact OnStar, view vehicle diagnostics, remotely lock and unlock the car, locate the car, honk the horn and flash the lights as well as downloading destinations to the in-car navigation system.

I think on this drive I would take just one of those European Car of the Year criteria — driver satisfaction — as the outstanding feature of the Vauxhall Astra Sports Tourer.

I wouldn’t say you are going to get overexcited driving it, but that may be a good thing. You would seldom feel disappointed in this Sports Tourer form.

Make no mistake about it, the Astra is a well-made car and deserving of scooping this respected award.

If you are looking to buy a new car of this type then I would recommend you take one for a spin or two, especially the Sports Tourer.

Options fitted on test vehicle include: