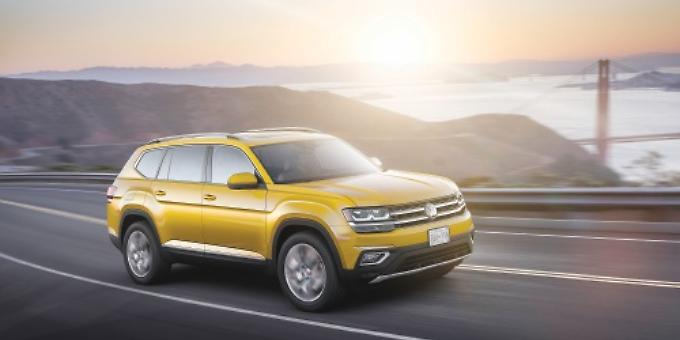 MY penchant for going large in SUVs (sport utility vehicles) has been well served this week with news from America of the launch of a new giant Volkswagen.

The car in question may not be headed for these shores as it is aimed at the North American market.

From the end of next year this particular “biggest and boldest” Volkswagen will be offered in the Russian and Middle Eastern markets.

Ah well, the way of the world here is “follow the money”. Russian oligarchs and well-heeled residents of Dubai must be slavering at the thought.

But what the world premiere of the Volkswagen Atlas in California does show is that there is to be no diminution in the supply of oversized cars to the western world, despite environmental and fuel-saving issues.

The new seven-seater SUV for the US market was unveiled on Santa Monica Pier at the end of the historic Route 66.

The Atlas will be built in Chattanooga, Tennessee, and offers innovative technology and “spaciousness”, according to Volkswagen.

“This is the biggest and boldest Volkswagen we have ever built in the United States, delivering the distinctive design and craftsmanship we’re known for, now with room for seven,” said Hinrich J Woebcken, VW’s CEO for the North America region.

The Volkswagen Atlas opens up an important segment for the brand — midsize SUVs formed a tenth of all new registrations in the US in 2015. For the first time, says Volkswagen, the Atlas offers a model in the category between the Tiguan and the Touareg that is “fully tailored to American needs” — that is, Americans are presumably still thinking large when it comes to cars.

Inside, the Atlas offers big space for seven adults and their luggage. Volkswagen Car-Net offers a wide range of online services, including standard App-Connect technology that offers integration with the three major smartphone platforms.

The Atlas is the only vehicle in its class to offer the automatic post-collision braking system. This automatically initiates a deceleration of the vehicle when a primary collision is detected by the airbag sensors, thus helping reduce residual kinetic energy and, in turn, the chance of additional damage.

The new Volkswagen Atlas arrives with a choice of two powertrains: a 2.0-litre four-cylinder TSI with gasoline direct injection and turbo charging with 175 kW / 238 PS and the already available 3.6-litre VR6 engine with 206 kW / 280 PS. Both engines route power through an eight-speed transmission.

The Atlas can be configured either as front-wheel drive or with 4Motion all-wheel drive in combination with the VR6 engine. Fuel economy estimates will be released ahead of its launch in the spring of 2017.