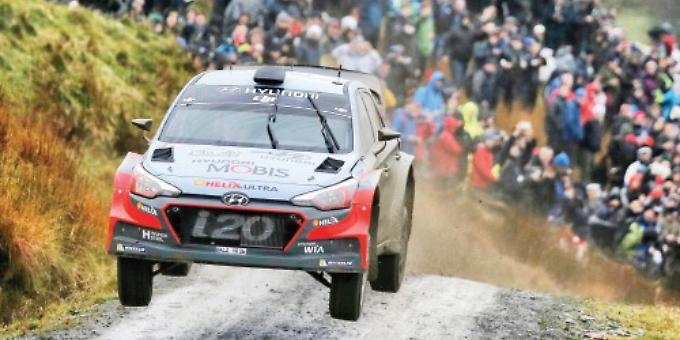 THE spectacle of rally driving — which I have long believed to be much more exciting to watch than Formula One — has brought about a surge in television viewing figures in Britain.

For the first time in more than 10 years, rally fans here have been able to watch live action from Britain’s round of the FIA World Rally Championship (WRC) on both terrestrial and pay-TV networks.

The Dayinsure Wales Rally GB, which ran from October 27 to 30, saw more people than ever turning on to live rallying.

This saw an audience peak 71 per cent higher than the 13-week average for the same time slot. A highlights programme shown on Monday after the rally attracted a peak audience of 450,000.

The event also benefited from extensive daily airtime on S4C via its Welsh-language programme plus regional BBC and ITV networks in both north Wales and north-west England.

Oliver Ciesla, managing director of WRC Promoter, said: “It has been many years since UK fans had the opportunity to enjoy live WRC action on a mainstream free-to-air network. We’re delighted with the audience figures from both the Sunday Power Stage and also Channel 5’s highlights show the following evening. Interest in Channel 5’s coverage has grown steadily throughout 2016 and that’s hugely encouraging ahead of the new-era WRC next season, when more powerful, dynamic cars will provide even more thrilling and exciting competition.”

Even ahead of the new generation of faster cars, the WRC has seen big audience increases in important TV markets in 2016.

Independent research agency Repucom has reported large audience growth in Japan (127 per cent), Germany (89 per cent) and Mexico (81 per cent) as well as in the Asian Pacific, African and North and South American regions. Highlights programmes after each rally on Channel 5 helped Britain’s viewing figures to move up by 44 per cent over the first half of the current season.

“With more people watching here in the UK and around the world, this is further great news for the rally,” said Ben Taylor, managing director of Dayinsure Wales Rally GB. “It’s good for the sport, it’s good for the fans, it’s good for our commercial partners and — above all — it’s good for Wales that more and more people are seeing what this remarkable country has to offer in terms of spectacular scenery, beautiful resorts and as an adventure destination.”