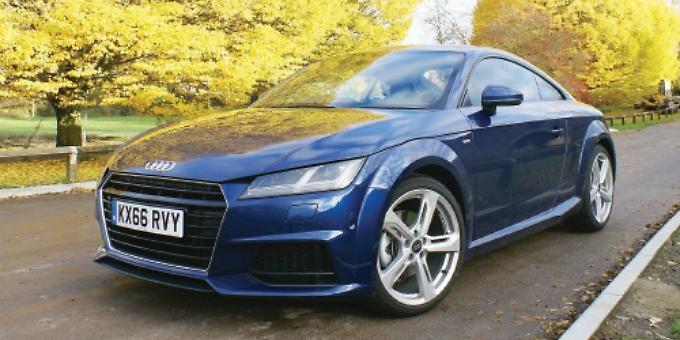 SUPER sports car style has always been left to the Italians — from magic Ferraris and Lamborghinis to the more modest yet equally stylish, early Alfa Romeos and Lancias.

But the Germans? That’s another question entirely, simply because the design of their sports cars — and indeed, their everyday cars — has tended towards the functional, practical and often plain sensible.

However, in recent years the Germans’ dour outlook on car design has relaxed a lot. German carmakers are now amongst the biggest and most successful players in the world, with some cracking cars popping up from designers (the best of which, I guess, emanate from California.)

Along the way, there has been one standout sports car design that gripped and excited me from the start — that is, in 1998.

This was the extraordinary looking Audi TT. But let’s go back a bit further to the origins of the TT tag.

In the beginning there was NSU Motorenwerke AG, or NSU, a German car company that also made motorcycles and cycles, which was founded in 1873. The Audi TT takes its name from the motor racing tradition of NSU in the Isle of Man TT (Tourist Trophy) motorcycle race.

NSU began competing in the TT in 1911 and later merged into the company now known as Audi. But the next part of the story was how the Audi TT came to evolve into this week’s sophisticated test drive, the Audi TT Coupe 2.0 TFSI 230 PS S line S tronic.

I remember seeing those first great images of the Audi TT with its attractive “retro racer” look.

Of course this “look” has morphed into something almost entirely different in the new Audi TT Coupe I have been driving.

That’s not to say that is a bad thing: on the contrary, the Audi TT is now an accomplished road machine and a great pleasure to drive.

And surely one cannot get nostalgic about a car that was created less than 20 years ago?

I get really nostalgic for sports cars that are generations old now and rightly treated as classic cars. Yet I reckon this Audi TT was an instant, modern classic from the moment it was first shown to the world.

In fact, 1994 saw the first signs of the Audi TT on a design drawing board in California (naturally).

Incidentally, one of the contributors at that Volkswagen Group Design Centre was Peter Schreyer, who has done so much as designer-in-chief to lift Kia into the global car-selling stratosphere.

Since that first Audi TT there have been two generational changes. The present car has bells and whistles that take your breath away.

This is the way of the world and one should not belittle the fact that this latest award-winning incarnation is a much better car than the original.

Yet I find it hard to shake the image of the first Audi TT, which probably justifies it as a classic simply because it stays in the mind.

I saw the transition of the early Audi TT into something sleeker and more, let’s say, “corporate” when I lived in Caversham.

My neighbour was a great Audi TT enthusiast. At first he drove an early TT which I liked very much. But I remember being struck by the fact that when a few years on he upgraded to his next Audi TT it was a markedly more sophisticated though a less exciting car in my eyes.

But the world of cars is nothing if not fast-moving: blink and you miss a model upgrade and next thing you know a brand new model appears.

Indeed, a new, faster TT was announced recently. The Audi TT RS, is available as before in coupé and roadster form and is “the most powerful series production TT to date”. Audi says it “merits comparison with the supercar elite with its sub-four-second acceleration capability and potential 174mph top speed”.

But that’s for the near future. I last drove and reported on the TT in March 2014.

I said then that with the Audi TT “I could not help but admire how it has become a car of sublime attraction”.

And it is that subliminal power of Audi to provide driver satisfaction that I experienced again in this 2016 TT drive.

I think I get this with most Audis: they are a cut above, and though you pay for the privilege — the test car came in at around £44,000 with a host of optional goodies fitted — you get an astoundingly good road car.

Handling is great, real power is there if you need it, with technological connectivity in abundance.

It may be that a sports car in any shape or form — especially given that they are mainly for two people only — is not for you.

Perhaps you have left your yen for a sports car in that bag of nostalgic motor car remembrances in the garage with the intention never to go there again.

Yet the Audi TT, in this super form, delivers the full set of sports car requirements in the package of a sublimely fine 21st century motor car.

Options fitted on test car include: