Drop in on the Clangers and Bagpuss at museum 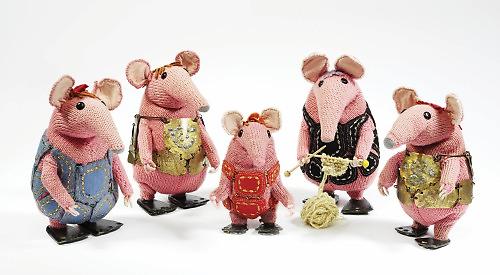 THE magical worlds of children’s TV favourites the Clangers and Bagpuss are explored in a new exhibition opening at Henley’s River and Rowing Museum tomorrow (Saturday).

Created by Oliver Postgate and Peter Firmin, and filmed in a barn in rural Kent, these characters brought new life to children’s television following their launch in the late Sixties and early Seventies.

Entitled “Clangers, Bagpuss & Co”, the exhibition is the first major retrospective of Smallfilms — Firmin and Postgate’s influential and
much-loved production company — and includes films not seen for decades.

Oliver Postgate’s voice and Peter Firmin’s puppets and artwork are cornerstones of 20th century British culture and their quirky and inventive programmes shaped the childhood memories of millions.

As well as telling the story of Bagpuss and the Clangers, the exhibition goes behind the scenes of some of their other creations — Ivor the Engine, Noggin the Nog and Pogles Wood.

From Watch with Mother in the Sixties to 21st century CBeebies, Smallfilms’ endearing characters and captivating imaginary worlds have been staples of children’s television across the globe. The Clangers returned to the small screen in 2015 and have been embraced by a new generation of fans.

Before the days of compuer-generated imagery, Smallfilms used detailed craftsmanship and bold ingenuity to create enchanting animations. Working in a barn and an adapted pigsty in rural Kent, Postgate and Firmin were able to maintain their creative independence and uniqueness of vision.

The exhibition, which comes to Henley from the V&A Museum of Childhood in Bethnal Green, brings together the original puppets alongside archive footage, sets and storyboards, photos, scripts and filming equipment, all set in a playful recreation of Oliver and Peter’s film studio.

River and Rowing Museum curator Chelsea Eves said: “So many of us hold a special place in our hearts for one or more of Smallfilms’ creations, be it the Soup Dragon, Ivor the Engine or Bagpuss.

“This wonderfully nostalgic exhibition looks not only at the iconic characters but also the painstaking processes that created their magical worlds.

“It is delightful to be hosting ‘Clangers, Bagpuss & Co’ at the River and Rowing Museum, and we hope that it will bring generations young and old together to celebrate these much-loved characters.”

Visitors to the museum in Mill Meadows can see Oliver Postgate’s stop-motion film camera, adapted using a small motor and bits of Meccano, learn why Bagpuss changed from orange to pink, and find out what Major Clanger was really saying from original shooting scripts.

They can also try their hand at animating the characters using today’s technology and learn to speak ‘Clanger’.

Children accompanied by an adult will be admitted free this weekend (February 4 and 5) as part of the museum’s commitment to being a family-friendly organisation.

Running alongside the exhibition are a number of themed family events and children’s workshops — the first of which, Moon Mischief, takes place on Tuesday, February 14, from 10.30am to 12.30pm. Join the Clanger Choir and make Clangers using model magic. Suitable for children aged four to seven. Cost: £8.50.

Two days later. on Thursday, February 16, the museum is hosting a family day on the theme of Space! from 10.30am to 4pm. A museum spokesman said: “Climb aboard your rocket and explore the cosmos as we travel with the Clangers to the moon and beyond. Enjoy an intergalactic space show, interstellar craft activities and dress like an astronaut — or a Clanger — to enjoy free entry. There will be prizes for the best costumes!”

Entry is free with admission to the museum and the spokesman added: “These activities will take place in the Thames Room and are best suited for eight years and up, although younger children are welcome.

“The workshops have limited places and adults need to stay with their children. The museum’s craft activities and trail will take place in the galleries and are suitable for all ages.”

Noggin the Nog will be centre stage on Monday, April 10, from 10.30am to 12.30pm when the museum hosts a Legendary Longboats workshop for children aged seven to 11. Journey on a quest with Noggin and build your own Viking longboat. Cost: £8.50.

Finally on Tuesday, April 11, there is a storytelling session, A Bottle for Bagpuss, for children aged four to seven that runs from 10.30am to 12.30pm. Hear the story about Bagpuss and a ship in a bottle. Make a ship in a bottle and a Bagpuss mascot to wear. Cost: £8.50.

l “Clangers, Bagpuss & Co” runs until Sunday, June 4. The museum is open from 10am to 5pm daily. An annual pass is £11 for adults (£10 concessions) and £9 for children aged four and over. For more information, visit www.rrm.co.uk