Non-rower ‘sticks his oar in’ to remember Great War dead 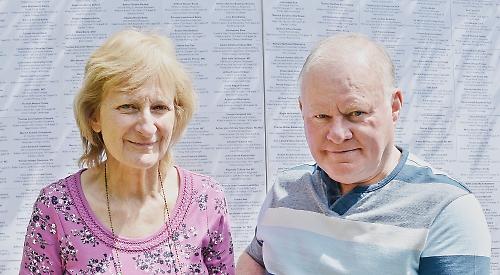 AN exhibition opening at the Old Fire Station Gallery today (Friday) aims to remember all the rowers of Henley and the Thames who fought and died in the First World War.

Running until Monday, July 9, and coinciding with this year’s Henley Royal Regatta — which takes place from July 4 to 8 — the exhibition is the brainchild of local historian Mike Willoughby.

Mr Willoughby, 70, who lives in Woodcote with his wife Lesley, began researching the First World War in 2007 after learning that his great uncle had been killed in action on the Somme.

His work eventually led to the founding of Henley’s Lest We Forget project and the publication in October 2014 of a 320-page commemorative book titled Bringing Them Home — Men of Henley 1914-1921.

Olympic rower Debbie Flood will declare the exhibition open at noon today at the gallery in Upper Market Place behind the town hall — the use of which has been donated free of charge by Henley Town Council.

Explaining how he came to focus on the rowing community despite not being a rower himself, Mr Willoughby said: “I researched the Leander Club memorial, after which I was invited to join the club as their guest on a trip to Ypres and the Somme.

“I passed my original research to them, and since then edited pieces on some of their men have appeared in their newsletters and on their website.

“I did ask them if they were interested in a general ‘Rowers of Henley’ project but understandably they said that their interest was Leander.

“Although not personally a rower, I saw that rowing had for a very long time played a large part in the history of Henley, and even from some time before the start of the Great War the Royal Engineers were a regular sight on exercise on the Thames. The Royal Engineer Yacht Club also competed at the regatta, so it was fitting to try and record the rowers of Henley who died.

“This has ended up with me identifying 475 rowers, writing a one-page biography of each, with a picture of the vast majority, and visiting their graves — as with every man researched — in France, Belgium, the UK and, most recently, Gallipoli.

“The exhibition will comprise an 8ft by 4ft memorial plaque containing the names and details of the 475 rowers, 14ft by 2ft pictorial boards on the rowers, pictorial boards of Henley town around the time, and various Great War artefacts and memorabilia.”

Mr Willoughby said his work on the Lest We Forget project over the past six years had been supported by his wife Lesley who, following a 2012 exhibition at Henley’s Holy Trinity Church, succeeded in securing a grant of £8,200 from the Heritage Lottery Fund.

He added: “This was matched by substantial donations from Henley Lions, Higgs Group, the family of Charles and George Tidman, Waitrose, Sir William and Lady McAlpine, Graham and Sarah Whittaker of Stoke Row and mainly the people of Henley. This enabled us to produce Bringing Them Home and funded three memorial plaques — one in the town hall and one each in Holy Trinity and St Mary’s Church — recording all of the men of Henley recorded to date who died in the First World War.

“We have also funded five granite tablets marking the unmarked graves of Henley soldiers who had died, in Holy Trinity and Fairmile cemeteries, numerous exhibitions and school visits — which are ongoing — all financed by the project.

“What we would consider to be a major unplanned bonus to the project was the petition that we organised to get NHS Property Services to rename Townlands Hospital as Townlands Memorial Hospital to reflect the old War Memorial Hospital which was the original Great War memorial financed by the people of Henley.

“Subsequent to this, the hospital developers have generously paid for a new Great War Memorial which contains the names of all of the now 313 men of Henley known to have died in the war. At the start of the project there were 194 men known but not all identified.

“NHS Property Services have given permission for the memorial to be sited in the grounds of Townlands Memorial Hospital and a ceremony will take place on Friday, November 2, when the Lord-Lieutanant of Oxfordshire, Tim Stevenson, has kindly agreed to conduct the ceremony.”

Mr Willoughby said his work with local schools had been one of the most rewarding aspects of the Lest We Forget project.

He praised the enthusiasm of pupils to learn about the lives of the soldiers in the trenches, adding: “Their interest in the artefacts and the questions they ask are quite amazing.

“I make annual visits to St Mary’s School and Rupert House have kindly included me in the Remembrance Day service.

“I also carried out an amazing project with Gillotts School where thanks to one of the teachers, Hazel Waeland, and her husband Paul Whitty, they recorded all of the names of the Henley soldiers who died in the First World War and it is the intention that these will be read out as a background at this year’s Remembrance Day service in Market Place.

“Along with the planned school visits to our exhibitions at Holy Trinity Church each year the continual interaction with local schools has been a very important part of the project.”

• Admission to the Old Fire Station Gallery exhibition, which is open daily from 10am to 7pm, is free. For more information, visit www.henley-lestweforget.co.uk