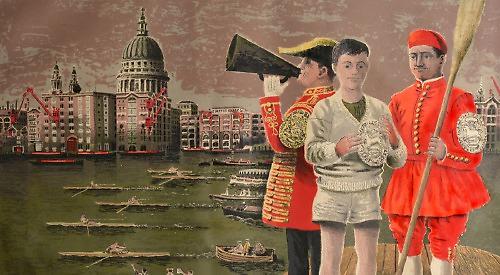 A “HIDDEN Histories” event at the River & Rowing Museum that was postponed from October is taking place next Saturday (February 23).

Running from 10.30am to noon followed by a film showing, “The World’s Oldest Boat Race” will tell the story of Doggett’s Coat and Badge, which has been held every year since 1715 and in 1975 was won by apprentice waterman Chris Drury from Remenham.

A spokesman for the Mill Meadows museum said: “Journey back to a time when rowing was the domain of the wherrymen — the water taxi drivers of their day — who raced for high-stakes wagers, drawing crowds of thousands along the banks of the Thames.

“Hear about Thomas Doggett and the river apprentices who competed to win his prestigious red coat and badge, and still do so today.”

The event will include an introduction to the history of the race, which covers four miles and five furlongs and passes under 11 bridges between London Bridge and Cadogan Pier in Chelsea. There will also be a chance to explore the museum’s collection on display and view objects from the archives.

The story of the project bringing this tradition to life through oral history, photographs and 100 years of archive material made publicly accessible for the first time will also be told.