Musuem closed due to flooding 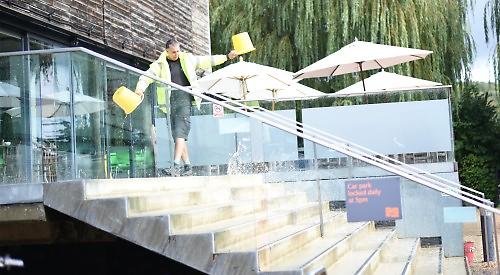 THE River & Rowing Museum was closed this week after heavy rain caused flooding inside.

The downpours early on Tuesday morning meant that the drains on the roof could not cope and water started to leak into the museum.

Staff and visitors were evacuated.

A crew from Henley fire station was called to the building in Mill Meadows at lunchtime on Tuesday.

The five firefighters used a generator on the roof to pump water through a hose and down the side of the building into a drain at ground level.

They isolated the electrical supply before an electrician arrived to inspect the damage.

The museum was closed for the rest of the day and staff had hoped to open as normal the following day.

However, the leak caused “significant” electrical damage” and it was deemed unsafe to return for a further 48 hours.

The museum was due to reopen today (Friday).

Head of marketing Catherine Yoxall said: “The quantity of water that came down overwhelmed the building’s ability to cope and found its way into multiple areas, mainly in the back of the house.

“We have been incredibly lucky that no objects, galleries or exhibitions have been damaged and, most importantly, the staff and visitors that were in at the time are safe.

“We don’t know exactly how the water found its way in but obviously if we were aware of any pre-existing problems on the roof we would have dealt with them.

“We have never had issues of flooding like this before. Normally it is at ground level. I have worked here for 10 years and I have never seen anything like this.

“We are dealing with the water damage to make the museum safe for staff and visitors.”