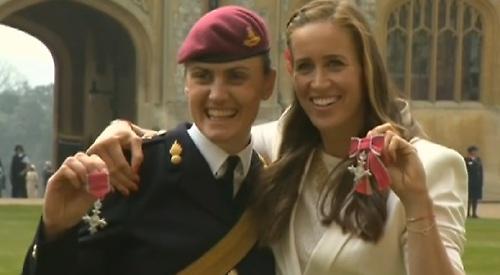 AN exhibition saluting the contribution of women to British rowing has been launched in Henley.

It features the racing hull in which she and Heather Stanning were undefeated, winning the coxless pairs at London 2012 and again in Rio four years later.

The women notched up 45 international championship wins in the boat and became the first female British rowers to retain an Olympic title.

Glover and her coach Robin Williams, who lives in Henley, were guests of honour at a reception and dinner to celebrate the launch of the exhibition in the museum’s International Rowing Gallery.

They also took part in a question and answer session with guests, chaired by Olympic rower Greg Searle.

Glover, 33, said that being given their own boat to compete in meant she and Stanning knew they could succeed on the world stage.

She said: “We were no longer being treated as the underdogs. It was then that I realised that the coaches believed in us, so we had to perform.

“But it was more than just a boat, it was a symbolic gesture. What it represented was that we knew the boat we were going to have for London and that is why it became so important.

“Every time you step in it, you have this desire to maintain your performance levels.

“It is really nice to have the chance to see the boat again and rekindle all of those memories.”

Glover was made an MBE for services to rowing after the London Olympics, which she and Stanning received from the Queen at Windsor Castle.

She said: “Getting the MBE was amazing. It was strange because it was recognition but I had not been working towards it. They felt that Heather and I had made a difference and said we were an inspiration to women and girls in sport and the legacy that we left means that more people wanted to get involved.

“Now is a really great time for women's sport in general and being able to keep that momentum going is important. This display is all about celebrating the people who have come before.”

Glover said she couldn’t choose between winning at London and Rio as her greatest achievement, adding: “It would be like asking someone to pick their favourite child.”

She said that winning the Bernard Churcher Trophy for single sculls at Henley Women’s Regatta in 2009 was the turning point in her career.

Glover explained: “Henley is the home of rowing and if you can race down the Henley course, whatever the result, it is a special day.

“I grew up not knowing anything about rowing, but I had heard about Henley! It is an iconic course and there is huge pride in Henley’s tradition with rowing.

“It was great preparation for the Olympics. Even though it was a very different race, it was about being close to the crowd.

“It was also important to me because it was one of the first times my family had seen me compete. I remember my dad coming up to me and saying I should be very proud. I never expected that I would go onto win a gold medal.”

Glover said she would recommend rowing as a sport but warned that success only comes from determination and hard work.

She said: “I never had a normal life outside of rowing. It is an all-encompassing sport. If you want to make it to the top, you have to make sacrifices.

“It gets harder and harder the longer you stay in the sport. You have given up so much of your time, so when you are there on the start line, it makes it even more important.

“Having said that, I took part in a home Olympics and won, which is so special.”

The conference was chaired by Robert Treharne-Jones, from Middle Assendon, who is an Olympic commentator and rowing historian.

Other sessions included an inside perspective on the GB rowing team’s preparations for the Tokyo 2020 Olympics.