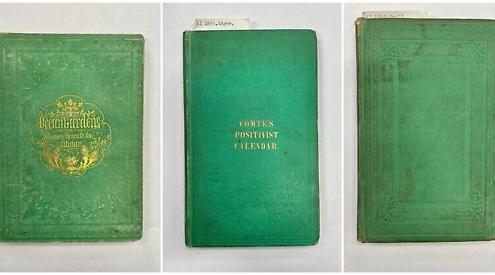 IF you have a row of cookbooks in your kitchen, then it’s probably obvious which are your favourite dishes from those pages which are dog-eared and spattered with flecks of sauce.

Books, especially practical ones, bear the signs of use.

Or maybe you clip recipes out of the paper and stick them inside a cookery book just because they might come in handy one day.

For books are storage places too, though if you want to hide something valuable by hollowing out a space inside it’s advisable not to choose a bestseller that any visitor might pick up. These thoughts are prompted by a curious and absorbing exhibition at the Weston Library in Oxford.

With its array of quirky exhibits and often witty captions, Sensational Books reveals how books are, first and foremost, objects.

Almost all books are designed to appeal to our sense of sight and many people derive pleasure from the sound of rustling pages or the crackle of old paper. We can also touch books, smell them, even taste them.

Yes, taste. A baby and toddler group has lent some books chewed by the children.

You could say that most people first encounter books with their taste buds. Don’t, however, test your teeth on a gardening book from the 19th century since the emerald green cover was dyed with arsenic. Even touching it with sweaty palms would be dangerous. It gives new meaning to the term “green-fingered”.

Mice gnaw books too and the results are here behind glass. Rodents do it not for food but to keep their teeth in check. As for smell, try The Bacon Cookbook on display here. Scratch and sniff the bacon rasher embossed on the cover and it supposedly releases the waft of a fried breakfast. It seemed rather elusive to me though I suppose it has worn off over time.

You can inhale the whiff of various libraries from little dispensers lined up as in a perfumery. The smell from Duke Humfrey’s library, part of the Bodleian, is described as “tranquillising: sunlight in still air; pencil shavings; rich tea biscuits and dust”.

Can one judge a book by its cover? Yes and no. Some of the items in Sensational Books were definitely meant to impress, for example. a sealskin cover, worn by much handling, or a devotional book whose exterior is studded with gems.

But a Penguin paperback of a Raymond Chandler thriller concealed a bomb-making manual used by the African National Congress in Seventies apartheid South Africa.

Rather as with a Kindle, no one could tell what the reader was reading in the case of the bomb-manual.

When Kindle came in, the death of the book was widely predicted. Yet the curators of this exhibition point out that e-books still make up only a fifth of total book sales, a number that doesn’t seem likely to change.

The march of technology has in fact prompted publishers to pay more attention to design, to the physical look and feel of their books.

Books not only furnish a room, they have more practical uses as wedges, props, pillows and general supports. One item in this delightful show is a very large tome indeed, simply entitled “Sat on book”. It was used as a booster seat by a Bodleian librarian over many years and was so useful that he never got around to actually cataloguing it.