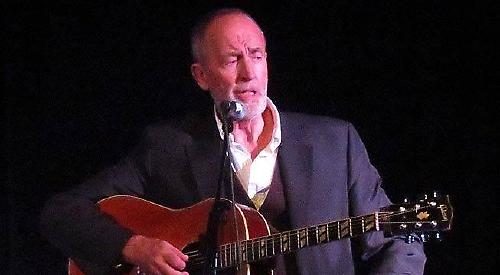 AT the age of four Mike Hurst made his first public appearance on stage at the Metropolitan Theatre in London where he sang California Here I come.

Now, 70 years later, he will present In My Time, an evening of his music and memories at the Kenton theatre in Henley.

The two-part retrospective will see him open with some choice cuts from his time with The Springfields and those of his friends such as Yusuf Islam, who is better known as Cat Stevens.

He will then close with a question and answer session with stories from his time producing some of the most recognisable hits of the Seventies and Eighties.

With 51 top 40 singles and 25 gold platinum albums with the likes of Showaddywaddy, Cilla Black and Shakin’ Stevens, Hurst has plenty of stories to tell.

For next month’s show, his 17th at the Kenton, he will be accompanied for the first half by his great friend Ray Fenwick, formerly of the Spencer Davis group, on guitar.

Hurst, who lives on the Fair Mile in Henley, performs annually at the New Street venue, and wanted this show to be a little different.

He says: “I’ll be doing the first half with Ray, who’s played guitar for me for years, and for the second half I thought a Q&A would be fun because I’ve got so many stories. “People can ask me anything they like about people from the Sixties, the Seventies, what they were like, were they good people, anything.”

After Hurst’s first appearance on stage as a toddler he spent most of the next decade performing with his mother’s theatre school in shows across London where he was known as the “speciality” act.

Then, aged 13, he persuaded her to buy him his first guitar and in 1960 made his first demo and auditioned for EMI at Studio 2, Abbey Road.

Despite being turned down, his mother was on hand again to give him a push in the right direction. She replied to an advert in The Stage for a singer/guitarist and he turned up for the audition without knowing who or what he was auditioning for.

He was offered the job with the band which turned out to be The Springfields, an act that would help him really kick-start his career.

Now, you could be forgiven for not realising that this is his “platinum” year in music as internet searches shows him being born in 1941 and 1942.

“I haven’t made myself one year younger or older,” Hurst jokes. “It’s a lie. When I joined the The Springfields, Dusty was 25 and Tom was 27. I was 19 but they thought I sounded too young, so they made me 20.”

He had a two-year stint as part of the chart-topping trio which spawned hits such as Silver Threads and Golden Needles, Island of Dreams and Say I Won’t Be There.

But in 1963 the group broke up and they went their separate ways.

Hurst recalled: “Looking back it was inevitable, because she was completely original, I mean, she was a one-off and she wasn’t getting out of our music what she wanted to get out of her music. So she went her way, Tom went his, became a writer, and I went mine and became a producer.”

One of the acts he discovered was Cat Stevens. “I discovered him and produced his records,” Hurst says. “He acknowledges but for me there would have been no Cat Stevens. I made a huge hit out of one of his songs, First Cut Is The Deepest, and Here Comes My Baby, for other artists.

“There’s a lovely picture on Facebook of him, what he decided to do a month ago was he went back to my old house in London, in Priory Road in St John’s Wood, West Hampstead, and he had a picture of himself going up to the front door and the caption is ‘I knocked on the door to see Mike Hurst, played him my new song, he wanted me and he changed my life for ever...’ and it’s really nice.”

It was while recording with Stevens the 23-year-old moved to Henley — because his wife told him to.

“I was in the studio recording Cat at the time,” he said. “I got a phone call from my wife and she said ‘I’ve found the house that we’re going to live in.’ I asked her where it was and she said ‘Henley-on-Thames’ and I’d never been there. As soon as the session finished I drove down here, saw the house off the Fair Mile called The Grove, and she was right, I fell in love with it and that was that — we bought the house inside a week.”

They stayed in the house for 20 years before moving to North Stoke on the river and then back again to the Fair Mile and everything had changed.

Hurst said: “When I first came here I must have been the only person to be a pop singer, if you like, ex-pop singer, ever in the Henley area.

“I knew loads of actors but really no singers and then of course [George] Harrison came, three years later.

“I’ve never forgotten, the guy who used to run the fish and chip shop in King’s Road said to me one day — and he was a scouser — he said ‘Hey, I expected to see George in here but he sends his chauffeur to get the fish and chips!’ He was very upset with that because George didn’t come in and get his [fish and chips] personally.

“Jon Lord was also in Henley, I produced for Jon and Ian Paice played on one of my albums. I knew all these guys. Henley was home to actors but also became a sort of haven for rock singers.”

When his mother died in 1981 he took over the running of the children’s theatre group in Henley, which is now in the hands of his daughter, Muffin. He has helped write the annual pantomime for 20 years.

Hurst has no plans to slow down his career and remains proud of his achievements in finding and nuturing talent.

He says “I’ve just got an album coming out, the Producers Archive Volume 4, while my record company, Angel Air, people say ‘you’ve probably produced more artists than almost anybody else.’

“If you look at my artist roster, it’s scary — I mean 60, 70 different acts, and they’re all sort of reasonably well known. It’s quite incredible. It’s a hell of a log/lot.” But it’s his love of performing that gives him that buzz.

Hurst said: “I love the Kenton Theatre. You see, it’s a personal place. Four or five years ago I did the Albert Hall in a charity do. That was a thrill. It’s a huge place and when it’s packed out, it’s just great.

“But at the Kenton you can see the whites of people’s eyes and you can talk to them. It’s like a one-to-one relationship and I really love that. It’s almost as if you’ve just stepped out of the audience and walked up there just to play them a few songs. It’s a really nice feeling, a very personal feeling.”