Folk partnership has Spanned the years 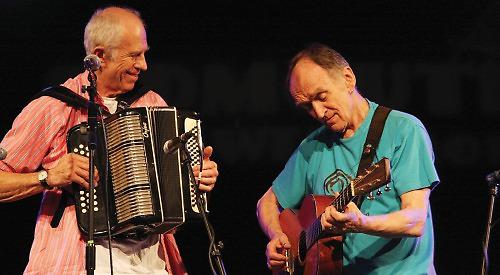 TWO leading interpreters of the English folk music tradition have embarked on a rare UK tour that will bring them to Nettlebed Village Club on Monday (March 27).

Among the seminal projects they have worked on together are John’s iconic 1976 Morris tunes album Plain Capers.

They are both past members of folk-rock giants Steeleye Span and present members of Brass Monkey.

A winner of the BBC Radio 2 Folk Awards’ lifetime achievement award, Martin Carthy has been one of folk music’s greatest innovators.

Over the years he has forged a series of trailblazing musical partnerships with the likes of Dave Swarbrick of Fairport Convention fame.

Closer to home, he has made music with his wife Norma Waterson — an award-winning musician in her own right — and daughter Eliza Carthy.

For his part, John Kirkpatrick is widely acknowledged as one of the most prolific figures on the English folk scene.

Performing solo, in duos, acoustic groups and electric bands, he has established an enviable reputation as an instrumental virtuoso known for his performances on the melodeon, Anglo concertina and button accordion.

He has been a member of the Albion Country Band, Magic Lantern, the Richard Thompson Band, Umps and Dumps, Trans-Europe Diatonique, and Band of Hope — as well as numerous ceilidh bands.