'Group of geography teachers' have sold out first date 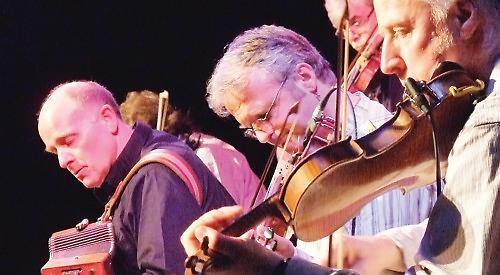 THEY’VE been likened to “a group of geography teachers” and dubbed “the opposite of glam rock” — but that hasn’t stopped Feast of Fiddles nearly selling out the first of their two shows at Nettlebed Village Club at the start of next week.

In folk circles the 12-man group, who first formed as a one-off ensemble for a 1994 concert at Nettlebed, have more recently been labelled “Bellowhead with bus passes”.

They are backed by a line-up of rock musicians on guitar, keyboard, saxophone and accordion, as well as Fairport Convention drummer Dave Mattacks.

Looking ahead to the two gigs, Nettlebed Folk Song Club organiser Mike Sanderson said: “This is a live music entertainment like no other which is guaranteed to be enjoyed by even the most doubting of friends dragged along! There are very few tickets left for Monday (April 3) but still a good number left for Tuesday (April 4). Call the box office to check availability.”

Both concerts at the High Street venue start at 8pm. Tickets are priced £20 in advance or £21 on the door.