Skeletons, masks — and an outstanding take on Petrushka 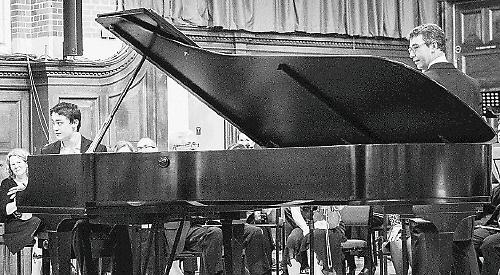 WHEN Stefan Hofkes, the RSO’s energetic and personable musical director, told his audience that it was in for a “wacky evening”, no one knew quite what to expect. Perhaps the array of masks adorning the walls of the Great Hall should have given us a clue.

The concert began with Saint-Saëns’ tone poem Danse Macabre, but without the orchestra’s leader, Neil MacLean.

He slithered in draped in a black cloak just in time to play the grisly violin solo that heralds the midnight revelries of skeletons on their annual ghouls’ outing.

After much rattling of bones the oboe announced the cock-crow arrival of dawn and the skeletons slunk back to their eternal resting places.

The strings in particular clearly enjoyed this evocative work, playing with enthusiasm and vigour but always with the good discipline needed to deliver a professional and very convincing performance.

The talented young pianist Robert Cheung — pictured performing with the RSO at a previous concert at the Great Hall — joined the orchestra to perform Ravel’s sprightly Piano Concerto in G. This produced the evening’s second (unintentional) wacky event.

The piano had been placed in the middle of the orchestra behind the entire string section and immediately in front of the woodwind. Its lid was dispensed with so that the woodwind had a clear view of the conductor.

The detrimental effect of this unusual arrangement was that the topless piano, already one step removed from the audience, lacked its own built-in amplifier. Consequently, most of the piano sound went straight up to be lost among its own echo in the dome above the platform.

In the slow movement the first bassoonist coped superbly with his notoriously difficult high solo, but the gorgeous, languid duet between piano and cor anglais was largely dominated by the wind instrument — beautifully played but not quite what the composer intended. Another victim of the acoustic imbalance.

The brilliant running passagework in the finale sounded muffled, as did Robert’s two virtuosic encores.

Nevertheless, Robert Cheung clearly has outstanding talent. He should be invited back for an acoustical rematch. His playing merits it.

The third wacky event, entirely intentional, was heralded by the presence of large screens on each side of the orchestra.

These illustrated, with text and pictures, the story behind Stravinsky’s ballet Petrushka while the orchestra played the concert version of this colourful drama.

The screens were very helpful as the plot unfolded, enhancing one’s appreciation of Stravinsky’s ability to portray the story so vividly in music.

The performance of this technically demanding work was outstanding. “This is a tough call but we are up for it!” was the body language before the first note was played.

The rock-solid underpinning by the four-strong squad of double-bass players would normally only attract attention if it WASN’T there. It is too easy to take their excellent contribution for granted.

All of the demanding woodwind and brass solos had been well prepared and were delivered with panache. The applause was loud and long.

So, what was this “wacky” event all about? If you thought it was Halloween — April fool!