Rock choirs on weekend tour to raise money for charities 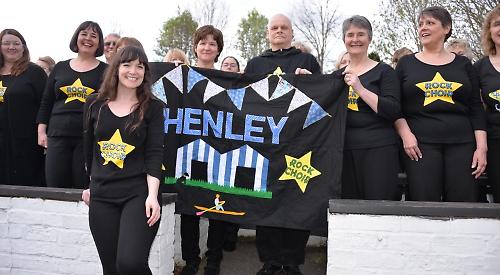 MEMBERS of the Henley Rock Choir raised £600 for the Sue Ryder hospice in Nettlebed with a “magical mystery tour” around the area.

The 60-strong choir performed at three venues on Saturday but only found out where each one was when they arrived there by bus.

They began at the Forbury Gardens Food Festival in Reading at 3pm before moving on to Wyevale Garden Centre in Hare Hatch and then  the Little Angel pub in White Hill, Remenham. Dozens of people crowded outside the pub to watch the final performance — despite light rain — and passing motorists sounded their horns and waved.

The choir sang songs by One Direction, Billy Joel and The Beatles and performed a special rendition of Happy Birthday for an audience member who was celebrating with friends.

Rock choirs from Caversham and Bracknell and Ascot followed suit on Sunday. The Caversham group appeared at the BBC Radio Berkshire studios as well as Fernygrove Farm and the Morrisons supermarket in Bracknell.

Choir leader Lucy Hewes said: “It was the most fulfilling weekend. The weather held out, which meant we had a great turnout at each stop and in turn raised a brilliant amount for four charities across the whole weekend.

“It only rained when we sang the lyrics in Mary’s Prayer ‘suddenly the rain came down’, and it did!”

The combined tours made a total of £582.73 through donations and bucket collections, while an anonymous donor later made it up to £600.