Marathon runner raises £3,000 with silent disco in memory of his partner 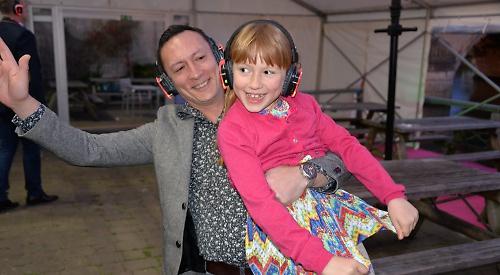 A SILENT disco in Henley raised more than £3,000 for charity, including an anonymous donation of £1,000.

About 100 people attended the event at the Angel on the Bridge pub on Saturday, which was organised by DJ Gary Boys.

Everyone was given a pair of wireless headphones with the choice of three channels playing different types of music.

Several people forgot they were wearing headphones and sang along out loud, while others took part in synchronised dance routines while listening to the same track.

Mr Boys, who came up with the idea after attending the Rewind festival at Temple Island Meadows in Remenham last year, said: “People really got lost in the music. By the end of the I had my cheese music on and Eighties and Nineties stuff, which I was singing along to.”

The disco was in aid of the NSPCC via the Claire Peacock Foundation. Ms Peacock, a social worker, was Mr partner when she died of a brain aneurysm three years ago. Since her death he has taken part in a range of fund-raising activities in her memory, raising more than £15,000 for the charity.

These include running the 2016 London Marathon, which he will be doing again this year, and hosting a music quiz at the Angel on the Bridge.

Mr Boys, who works in sales recruitment, said: “This went even better than I expected. It was my first time doing a proper silent disco but I’d love to do it again. I would like to thank Mark Dunlop at the Angel on the Bridge, Mike McTeague from Lulu’s Marquees, Darren Martin from Hobbs of Henley and all the amazing people who attended and made the night a success.

“We danced, sang and laughed the night away and the amount we raised was great.”

The also included a silent auction with lots including trips on a Hobbs of Henley Olympic launches and a day working alongside Henley chef Shaun Dickens at his restaurant in Station Road.