The European Union's musical ambassadors really did spoil us 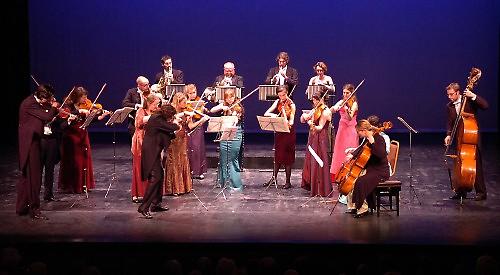 THE European Union Chamber Orchestra, founded in 1981 as musical ambassadors for the European Union, has gained a worldwide reputation for bringing performances of the highest quality to the most prestigious concert halls in more than 70 countries.

Their visit to the Hexagon endorsed this worldwide acclaim. Directed by Eve Stegeman, the playing was energetic and captivating throughout, dismissing any outdated notions of classical music being staid.

To add to the appeal, the players of this compact ensemble stood to perform, their swaying movements indicative of the musical interaction taking place.

Further visual delights were the ladies’ outfits — colourful reds complementing the backdrop and the sparkling sequins providing a welcome change to the ubiquitous black uniform of other orchestras.

The programme included Mozart’s famous Sinfonia Concertante for Violin and Viola K364 sandwiched between two serenades — the first also by Mozart and the second by his admirer Tchaikovsky, inspired by the former’s composition.

The Serenade No 3 in D major K185 is amongst the best of Mozart’s early works, with a miniature violin concerto skilfully interwoven through its seven movements.

The bright opening horn passage, echoed by the violins, paved the way for a movement largely dominated by simple, catchy themes running up and down the scale. The clear texture, typical of the late 1700s, was crisp and incisively delivered.

In the andante, Stegeman, now playing as soloist, gave a lyrical account of the more expansive passages whilst in the following rondo she displayed true virtuosity as notes flew by in rapid succession.

After a further slow movement and a couple of characteristic minuet and trios, the serenade ended with a lively jig which passed through a multitude of key changes and demonstrated the impeccable timing and unity of the whole orchestra.

Pike first shot to fame when she won the 2002 Young Musician of the Year competition at the age of 12, since establishing herself as one of today’s most exciting players.

Here she was on dazzling form and together with Ridout enchanted with her unique flair and artistry.

Ridout, a less established player, shone in the andante with his warm and eloquent tone, whilst later on the two players matched each other with perfect synchronicity in the virtuosic cadenzas.

After the interval came a moment of calm in the form of Elgar’s short Elegy for Strings Op 58, muted throughout and beautifully poised in the placing of slow notes.

Tchaikovsky intended his Serenade for Strings Op 48 to be played by as large a string orchestra as possible.

Despite being only fifteen in number, this ensemble filled the hall with resonant sound, from its broad opening double-stopped melody through to the elegant and uplifting balletic waltz. The elegy brought an anguished and darker emotional intensity.

The last movement, based on a rustic folk melody and reminiscent of Tchaikovsky’s own second symphony (Little Russian) finished with an extended accelerando bringing it all to a brilliant end.