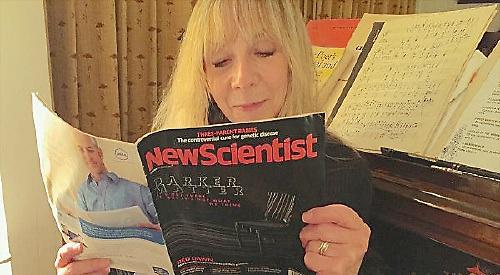 WARGRAVE-based singer-songwriter Charlie Dore is preparing to launch her eagerly awaited new album with a special live preview concert at the Unicorn Theatre in Abingdon.

The album, Dark Matter, is due out next Friday (May 5) — but fans will have the chance to hear it played all the way through for the first time the night before.

Charlie, who is best known for her huge 1979 hit Pilot of the Airwaves and for
co-writing Jimmy Nail’s 1992 number one Ain’t No Doubt, said: “It’ll be the first time we play the entire album live, but we’ll be doing the favourites in the second half too.”

Charlie’s last album was 2014’s Milk Roulette. Her career has also included a series of acting roles in TV, film and comedy — including opposite Jonathan Pryce in The Ploughman’s Lunch.

Discussing the inspiration behind her latest collection of songs, she said: “I was fascinated to learn that while dark matter makes up 85 to 90 per cent of the universe, even scientists still don’t know what it’s made of.

“This set me thinking about the parallels between massive, eternal themes and small, ordinary dramas, where humans are routinely baffled by their own inner space.

“I was aiming for a cocktail of speculation, dreams, secrets, stories and the odd joke — because whatever dark matter may turn out to be, I think it probably isn’t all dark.” Charlie, who is preparing to undertake a
28-date UK tour in support of the new album, will be performing alongside
multi-instrumentalist Julian Littman of Steeleye Span and five-string double bass player Gareth Huw Davies.

Doors open at 7.15pm at the Checker Walk venue, with the music starting at 7.30pm. Tickets are £14 and can be booked by visiting www.charliedore.com and clicking on “live”.

Charlie’s next concerts within relatively easy reach of Henley are at St Pancras Old Church in London on Thursday, May 11, and The Stables in Milton Keynes on Saturday, May 13.

Having grown up in the Peak District surrounded by traditional music, last year saw them win “best original song” at the BBC Radio 2 Folk Awards, where they were also nominated for the Horizon Award.