Keyboard wizard is getting caped up to benefit moon bears 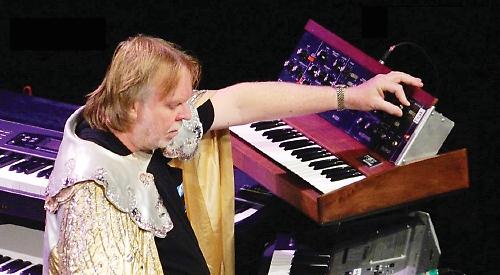 HE may be known to TV viewers as one of the BBC’s Grumpy Old Men, but Rick Wakeman is preparing to show his softer side when he visits the Mill at Sonning later this month.

The keyboard wizard, who enjoyed five spells with prog rock giants Yes between 1971 and 2004, will be donning his trademark cape for a night of fun and fundraising in aid of Hong Kong-based charity the Animals Asia Foundation.

“An Evening with Rick Wakeman” gets under way at the Sonning Eye venue at 6pm on Sunday, May 14.

The master of ceremonies for the evening will be Downton Abbey and Grantchester star Peter Egan.

The veteran actor, whose film roles include the 1981 best picture Oscar winner Chariots of Fire, was the first artistic director of the Mill at Sonning when it opened its doors in 1982.

Mr Egan is a long-standing supporter of the Animals Asia Foundation, which was founded in 1998 by a British woman called Jill Robinson.

She felt compelled to act after learning of the plight of the Asiatic black bear, which is known as the “moon bear” because of the yellow crescent shape on its chest. Moon bears are farmed throughout Asia for their bile — a digestive fluid produced by their liver and stored in the gall bladder, which is used in some forms of traditional Chinese medicine.

It is thought that around 12,000 bears are farmed for their bile in China, South Korea, Laos, Vietnam and Myanmar.

Animals Asia works to free the farmed bears from captivity. It operates rescue centres in China and Vietnam where the creatures are provided with comfortable dens and semi-natural enclosures where they are able to recover in safety and spend their lives in the company of other bears.

Mr Egan said: “You can sponsor them, you can adopt them, you can take out a donation that will give the bears treats — it doesn’t have to cost a lot of money. There’s a whole menu of support things that one can do to help these bears and rehabilitate them.”

For now, animal and music lovers in the Henley area are being asked to support the charity — which also works to improve the lot of cats, dogs and captive animals in circuses and safari parks — by shelling out £50 for a ticket to the show on May 14, which includes a two-course home-cooked dinner.

A similar gala evening at the Mill last year raised £18,000 for Animals Asia.

Mr Egan added: “I’m a proud and devoted ambassador for this great charity and I’m delighted that my great friend Rick Wakeman, who is also devoted and has given so much of his time to help raise money for this amazing charity, is taking part. I can’t tell you how thrilled I am.”