Life on the road is a family affair for Nettlebed patron 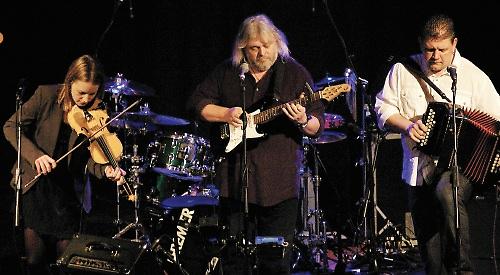 FRESH from selling out the Royal Albert Hall last month with his Show of Hands compadre Steve Knightley, Nettlebed Folk Song Club patron Phil Beer is taking his own band on the road for a 10-date UK tour starting today (Friday).

Gigs at Lowdham Village Hall in Nottinghamshire and Wymondham Central Hall in Norfolk are followed on Monday (May 15) by a show at Nettlebed Village Club.

The night promises to be an extravaganza of what Phil describes as “folk and roll”.

Now in his fifth decade as a performer, the 64-year-old has carved out a reputation as one of the finest
folk-rock musicians in the country.

A celebrated multi-instrumentalist and virtuoso session musician, his talents have seen him play on albums by the Rolling Stones, Mike Oldfield and Steve Harley among others.

Notable folk music collaborations over the years have included his membership of the Albion Band from 1984 to 1991 — for which he played guitar, mandolin and violin, while also contributing vocals.

Happily, it was not long after his time with the Albion Band drew to a close that he hooked up with the group of musicians he has come to regard as his “musical family”.

The Phil Beer Band evolved organically in the early to mid-Nineties at Maisemore in Gloucestershire.

It started life as a loose federation consisting of Phil, Nick Quarmby and Steve Crickett — all of whom lived close to each other at the time — and melodeon player Gareth Turner from Northamptonshire.

Or as Phil puts it: “Our village hall needed a ceilidh band so I recruited a bunch of mates and off we went.”

Following in the tradition of the Albion Band — of which both Phil and Gareth were former members — the band always interspersed the country dances with the odd song.

Over a long period of time, the band morphed into what Phil now calls a “folk’n’roll” band with country rock overtones.

By his own admission, the band is a vehicle for Phil to return to the electric guitar and to have a good time with his mates.

But with a quarter of a century of history under their belts, there is of course slightly more to it than that.

“We are a family and all families have reunions,” says Phil.

“We catch up with each other’s news. We laugh together and play music together, and in so doing we remind each other why we started doing this over 30 years ago.

“It’s a glorious musical celebration of enduring friendship. Even our road crew and our support band The Hawthornes are family. It’s the most joyous, exhilarating highlight of my musical calendar.”

With joy at times comes sadness, and at the end of last year the band’s regular bass player Nick Quarmby lost his battle with cancer.

Nettlebed Folk Song Club organiser Mike Sanderson, who knows the band well, said: “Nick is being replaced by Greg McDonald, a talented singer and bass player who has stood in for Nick on several occasions. They are dedicating the tour to the memory of Nick, who was a great friend for so many years.”