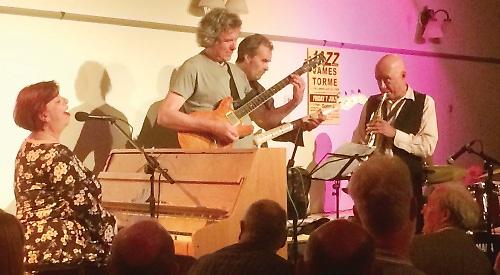 NEVER in his wildest dreams could John Calvert, a jazz fanatic since his early days growing up in London, have imagined that when he brought the Art Themen Quartet to Goring Village Hall in 1999, he would kindle a flame that would still be burning brightly 18 years later.

The Gap Gig has become an institution, much loved by patrons and musicians alike. And what musicians!

The roster of players reads like a veritable Who’s Who of the greatest names in British and world jazz — including a certain Mr Jamie Cullum, who twice appeared at Goring on his early steps towards international superstardom.

Art Themen’s inventive and exciting saxophone playing and genial manner has remained a favourite with Goring audiences ever since 1999, so it was fitting that he should lead the band to celebrate the Gap Gig’s “coming of age party” on Friday night.

This saw a truly dazzling all-star line-up, with John Etheridge on guitar, Roger Carey on bass, Winston Clifford on drums and the great Liane Carroll on piano and vocals.

Art Themen, affectionately described by John Etheridge as “a legend in his own lunchtime”, set the party in motion and sharpened the appetite for the delights to come with a grooving jazz-rock interpretation of Sonny Rollins’s Playin’ in the Yard.

“Don’t worry, you’re not at a rock concert,” he reassured the audience, before diving into a much straighter rendition of Doxy.

First Moves completed the trio of Rollins classics, with Etheridge, Carey and Clifford laying down a ferocious beat to set toes tapping and heads swaying.

With band and audience nicely warmed up, it was time for Liane Carroll to take her place at the piano, cheekily introduced by Art Themen’s treacly cod-Twenties rendition of A Pretty Girl is like a Melody.

As he remarked, awards can be grossly overrated, but in Miss Carroll’s case she is thoroughly deserving of her position as No 1 Singer at the 2016 British Jazz Awards. Her soulful and rich-toned voice, full of life and energy, is simply amazing.

She takes each song by the scruff of the neck, drawing every drop of emotion from the lyrics of Love For Sale, You Don’t Know Me and Autumn Leaves.

And yet, there’s never any sense of melancholy or self-pity in these tales of heartbreak, loss and regret. She presents each in life-affirming, swinging fashion, with all the freshness of a newly minted coin. Tom Waits’s beautiful Picture in a Frame brought the set to a moving close.

The second set began with a plug for the forthcoming gig by James Tormé — son of the late, great Mel Tormé — on Friday, July 7, from 8pm to 11.30pm.

James will be appearing as part of his Colour Me Jazz Tour. And what better way to “sell the wares” than by playing his father’s 1962 hit Comin’ Home Baby? As Art Themen remarked: “Be there, or be square!”

Rapturous applause greeted Liane Carroll on her return to the stage. She took That Old Devil Moon at a galloping pace with a nice Latin feel, faultlessly negotiating the lyrics and scatting to tremendous effect.

Hoagy Carmichael’s The Nearness of You brought a change of mood and a delightful duet with John Etheridge.

Art Themen then took to the stage alone to play Thelonious Monk’s Ask Me Now — a masterly performance confirming his genius as a jazz improviser.

With Liane Carroll and the full band back in place, the band stormed through Georgia and Caravan.

Winston Clifford briefly put his drumsticks aside to join Liane in a clever and often hilarious vocal duet — freely exchanging lines and scat phrases of There’ll Never Be Another You backwards and forwards across the stage.

A fast paced blues should have brought the gig to the “witching hour” of 11pm, but with the audience clamouring for more they returned to the stage for a rousing finale of Bye Bye Blackbird.

“Jazz must be the only art form,” said Art, “where the artists have as much fun as the audience.”