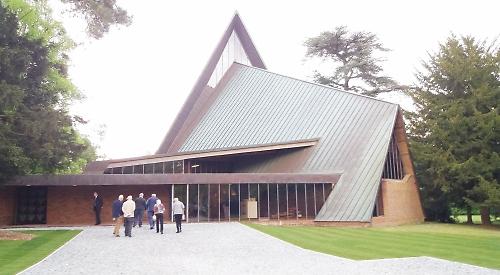 IN the special setting of the architecturally striking former Church of St Anne at Fawley Court, just outside Henley, the Henley Symphony Orchestra, conducted by Ian Brown, held its annual “open rehearsal” for the orchestra’s Friends — which doubled as a preview of the forthcoming summer concert.

The unusual church, a Grade II-listed building with a striking modernist style, was commissioned by Prince Stanislaw Albrecht Radziwill from Polish architect Wladyslaw Jarosz and completed in 1971.

It was intended partly as a family burial place. The prince was himself interred in the church’s crypt after his death in 1976, underscoring his confidence in Polish commitment to this jewel of the English countryside.

Such a choice of venue, being somewhat shrouded in mystery, attracted a larger than usual cohort of “curious” HSO Friends — their numbers inflated by the newly-elected Mayor of Henley, Kellie Hinton, John Howell MP, town councillors, other VIPs and private guests of Fawley Court’s owner, Aida Hersham, who had kindly offered the church as an alternative to The Henley College.

There was a buzz of expectation as people took to their seats, and they were not about to be disappointed.

Matthew was the winner of the first Henley Young Musician Competition, organised by Henley Music School and his prize was this solo with the HSO. His coolness under pressure and mature tonal quality were well above his years — the slow movement was beautifully played.

He later immersed himself in some light-hearted brass repertoire with members of the orchestra’s brass and horn sections, including, in deference to Aida Hersham, Verdi’s Aida.

The programme was further enlivened by another orchestral sub-group — this time from the woodwind, who gave a charming account of a quintet by Franz Danzi (1763-1826), a distinguished member of a musical German family of Italian descent and best known for his wind ensembles.

After the programme, the audience retired to enjoy refreshments with orchestra performers.

The next diary date is Sunday, June 25, when the orchestra presents its summer concert under canvas at Shiplake College.

For more information about the HSO and the Friends Scheme, visit www.
henleysymphonyorchestra.co.uk