Eurovision can't compete when our talented singers are on song 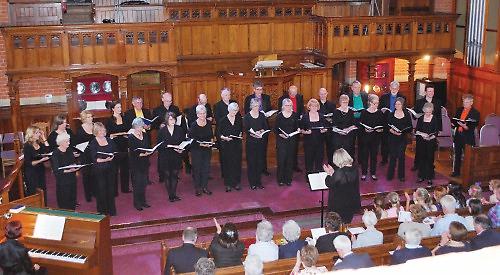 ON the night when the glitzy Eurovision Song Contest was the main ‘cultural’ offering on television, Aliquando’s concert — intriguingly titled “American Tapestry” — was performed to a full house at the Christ Church Centre in Reading Road.

The packed programme of 18 musical numbers lived up to its name, presenting a wide range of American music from humble spirituals to brash West Side Story numbers, including some gems for violin and piano by way of instrumental diversion.

The choir, conducted by its inspired musical director Anne Evans, is outstanding not only for its superb diction and perfect balance between the voices but also for its ability to slip seamlessly from one musical genre to another.

Hebrew love songs sung in their native language, with a Klezmer-style violin accompaniment played by Mandy Beard, flowed as easily from their lips as the timeless spirituals As I Went Down to the River to Pray and Steal Away.

Mandy Beard followed this with a spirited performance of Copland’s Hoedown in an effective arrangement for violin and piano. As well as giving a deliciously spiky accompaniment to Hoedown and accompanying the choir throughout the evening, the pianist Anita D’Attellis also contributed three well-selected piano solos — the rarely heard Le Banjo by Gottschalk (a talented composer most people seem to have heard of but never actually listened to), a Fantasie by Samuel Coleridge-Taylor based on Deep River, and Scott Joplin’s Magnetic Rag — the latter being played with a light, even touch in strict tempo, as it should be performed but often isn’t.

Not to be outdone, towards the end of the programme, the choir fielded four superb soloists from within its own ranks.

Dan Evans has a wonderfully rich bass voice and all the power needed to provide a stirring performance of Old Man River that drew sustained applause from the audience.

Meryl Davies, soprano, then stepped forward to give a stunning rendition of Gershwin’s vocally challenging Summertime that again had the audience in the throes of ecstasy.

Valentine Ford, soprano, gave a wickedly coquettish performance of I Feel Pretty — and was joined by all the ladies in the choir, arranged in the form of a chorus girl line-out, for a reprise.

This release of tension was exactly what was needed as the antidote to the preceding emotive solos.

There was more to come. Alex Haigh, tenor, took to the stage to give a timeless and heart-rending account of Maria from Bernstein’s West Side Story. Again the audience exploded.

The evening ended with a rousing performance of the famous chorus America from West Side Story. To show their appreciation, the audience were asked to give generously to a collection taken at the door in aid of the RNLI.

Let us hope the TV audience for the Eurovision Song Contest enjoyed their evening’s entertainment as much as did the good folk who turned up at the Christ Church Centre to hear just how incredibly good their local talent can be.