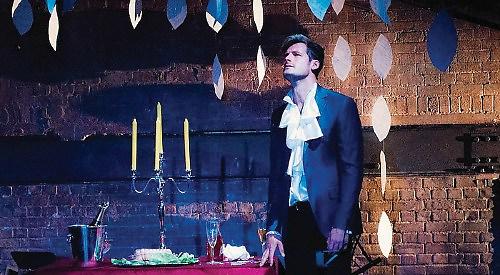 TIME Zone Theatre’s opera double bill at the Kenton Theatre induced a blend of perplexity and satisfied amusement — depending on which half of the performance one alludes to.

The first half was the short opera Mozart & Salieri by Russian composer Rimsky-Korsakov, its libretto based on Alexander Pushkin’s story Mozart and Salieri, the inspiration for Shaffer’s Amadeus.

Rarely performed, it follows the apocryphal legend that composer Antonio Salieri murdered his rival Mozart, whom he saw as idle and unworthy of his god-given genius.

Inviting him to dinner, he spikes his wine with poison. The work is a close-up of the tormented mind of a basically generous man torn between admiration and jealousy.

In a new English translation, staged by an award-winning team, including director Pamela Schermann and musical director Andrew Charity, it did not quite captivate the audience as its billing predicted.

Should we blame the sparse staging, the minimalist instrumental scoring of keyboard and viola, or the dearth of melody in the 50-minute dialogue?

This said, some of the recitative-like dialogue was appealing, and there could be no doubting the singing quality of baritone René Bloice-Sanders (Salieri) and tenor Aidan Coburn (Mozart).

Both acted convincingly and projected with such clear diction that we could follow the conversation without surtitles. It was, reservations aside, a well-worked production.

For immediate relief, the second half comprised an attractive Mozart medley with a libretto by Pamela Schermann that brought wit, melody and farce to the stage, dispelling any lingering gloom from Mozart’s demise.

Here was his music at its light-hearted, inventive best in the reception area of the infamous Vienna Grand Hotel — the setting for three people’s entanglement in a web of love and intrigue.

It was a fast-paced nocturnal journey, replete with smartphones and 21st-century dress (occasionally ‘undress’) with re-scripted songs from Mozart’s favourite operas, including arias from Don Giovanni, Zaide, The Abduction from the Seraglio, The Marriage of Figaro and The Magic Flute.

For this the baritone and tenor were joined by Nina Kopparhed, a formidable soprano who really entered into the spirit of a maid fighting off two rival suitors and had a voice that matched those of the two males in both volume and technical security.

It was fun to watch and a pleasure to listen to.