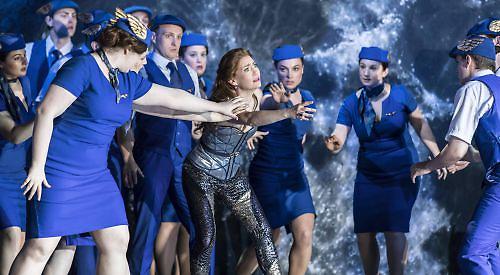 ANNILESE Miskimmon’s new production of Semele for Garsington Opera is a triumph. It is entertaining in its comedy, enchanting in its imagery and beautifully complements the wonderful orchestral writing.

This is the first time a Handel opera has been staged at Wormsley Park. The production presents a classical myth of love, jealousy and desolation.

It is set in the style of Sixties stage and screen, with witty design by Nicky Shaw, in which Juno, goddess of marriage and childbirth, appears as a sultry Sophia Loren in headscarf and shades with seven children in tow; Jupiter, her husband and king of the gods, the louche seducer, casually smokes a cigarette; and Semele swaps her human bridal gown for spangled leggings in a celestial boudoir.

The reluctant bride, Semele, in love with Jupiter, is whisked away from her wedding ceremony to the home of the gods.

She convinces Semele to demand that Jupiter shed his human guise and appear in his godly form, knowing that his thunderbolts will kill her.

Semele and Jupiter are thus torn apart and their son Bacchus, god of wine, rises like a phoenix out of her ashes.

There is no shortage of special effects and imagery. Lightning bolts, balloon clouds and the chorus as cabin crew with white doves on sticks accompany the mortal Semele up to the gods. There is comedy too, most notably in the hospital scenes as Somnus, god of sleep, supplies pregnant Juno with gas and air.

Under the baton of Jonathan Cohen, who makes his conducting debut with the Garsington Opera Orchestra, the orchestral playing is excellent throughout.

Particular mention goes to the continuo who maintain sensitive contact with the singers during the recitatives.

Soprano Heidi Stober is a sprightly Semele and tenor Robert Murray a suave Jupiter. There are strong performances too from mezzo-soprano Christine Rice as the raging Juno and baritone David Soar as Somnus, remarkably singing horizontally on a bed wrapped in a bizarrely alive duvet.

If you are lucky enough to find tickets to this production there are six more performances between now and July 4, including tonight (Friday).

Arrive early, for there is plenty to do. Take a ride in the vintage bus to the enchanting walled garden with short recitals every Saturday in the green theatre by young artists. Or enjoy afternoon tea by the immaculate cricket pitch, a stroll around the lake or meet friends in the champagne bar, all in elegant evening dress.

As part of Garsington’s programme of public outreach, a series of free public screening of Semele is planned across the UK.

These will take place in Oxford and Skegness on July 1, at Ramsgate on July 22, at Bridgwater on July 29, and at Grimsby on October 15.