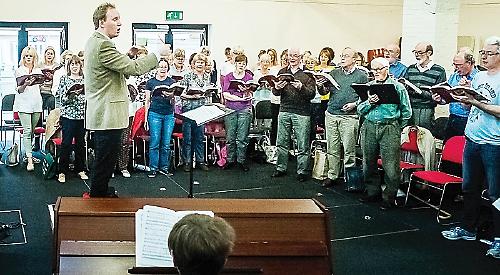 FAMOUS choruses and arias from stage and screen are at the heart of the Henley Choral Society’s summer concert next weekend.

Classic passages from the operas of Mozart, Puccini and Verdi will be joined by big screen hits from the likes of Les Misérables, Moulin Rouge and Bernstein’s West Side Story.

The concert takes place at the Christ Church Centre in Reading Road on Saturday, June 17, starting at 7.30pm.

A spokesman for the society said: “The concert repertoire, crafted by our musical director, Peter Asprey, will chart a journey of best-loved tunes from the earliest operas at the start of the 17th century to more recent film and stage works.

“Among the most famous works will be Donizetti’s Chorus of Wedding Guests, Verdi’s Brindisi from La Traviata and The Chorus of the Hebrew Slaves from Nabucco. The highlights from recent years will be songs from the emotional big screen productions of West Side Story and Moulin Rouge.”

Bringing this chronological approach to life will be two exceptional soloists — soprano Rebecca van den Berg and tenor Paul Curievici — both of whom will perform alone and with the choir at various points in the evening.

After one such performance, Opera magazine hailed her as “the star of the show, with dramatic and vocal depth as she showed in her big aria”.

Paul Curievici has performed in several roles at the Royal Opera House after making his debut there in 2013 as Jack Worthing in Gerald Barry’s The Importance of Being Earnest. He has also performed with the New York Philharmonic and Opera di Roma.

His versatility has led him to work as an orchestral pianist with the Bournemouth Symphony Orchestra, as a repetiteur with Holland Park Opera, and with the BBC Symphony Chorus and London Oriana Choir.

Henley Choral Society chairwoman Susan Edwards said: “As you can imagine, the choir has enjoyed rehearsing for this summer’s concert. The opera choruses are vocally demanding but incredibly uplifting.

“We are sure that people will find themselves singing along with the choir as they hear these well-known works.

“I am delighted our wonderful pianist David Smith is featuring in this concert.”