Rule-breaker takes us into a world of poetry, magic and exquisite sounds 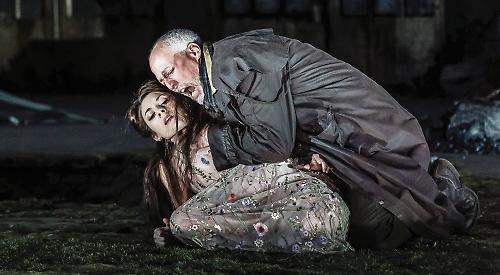 A SULTRY afternoon with the sun streaming through the glass walls of the theatre provided the setting for the sensuous music emanating from the pit.

On stage we saw the decrepit structure and faded grandeur of an old Allemonde mansion, suffused in gloom.

This was the opening scene of Pelléas and Mélisande, Debussy’s only opera and a debut for Garsington Opera.

It is a unique work and one which may come as a surprise to those who enjoy their opera in a more conventional form.

For a start there is no chorus — haunting sailors’ voices are heard once, briefly in the distance and that is it.

There is also none of the usual pattern of alternating arias and recitatives which allow characters to elaborate their feelings and demonstrate vocal technique.

Instead Debussy presents each scene as a continuous flow of music, making little distinction between story and personality.

Whilst each character does have their own motifs, these are not easily recognisable, being much more ambiguous than motifs used by Debussy’s contemporary, Wagner, a prolific opera composer.

Both story and characters together are swept along in waves of nuanced sound by the orchestra. the predominant force in this work. The score demands a large complement of instruments, yet these are used for atmosphere and colour, not volume.

The Philharmonia Orchestra, another first for Garsington, was superb — a lush sweetness ebbing and flowing with the drama, yet never overpowering the singers even during heightened moments.

The plot is simple and tells of forbidden love between Mélisande, Golaud’s wife and Pelléas, his stepbrother.

The shining star was Andrea Carroll as Mélisande, her subtle yet polished tone with pure top notes entrancing all.

Very impressive too was the understudy bass-baritone Joseph Padfield as Golaud, who stepped in and sang from the side. Jonathan McGovern as Pelléas had suitably heroic top notes, while young William Davies did a superb job as the not quite so innocent Yniold.

After the interval, with outside light dimming, Tom Piper’s striking design took on a rich intensity.

There were more dramatic moments too as Pelléas and Mélisande finally declared their love for each other in a passionate outpouring. Overhearing this, Golaud kills Pelléas with his sword, wounding Mélisande too. After having a baby she then dies, with the wretched Golaud watching on.

If you enjoy tapping along to a “good tune” then this may not be the opera for you. If, however, you wish to step into a different world and experience poetry, magic and exquisite sound, then do try to get a ticket for one of the remaining performances of this lovely opera.

The grounds at Wormsley are truly glorious, the lake surrounded by lawns and trees as far as the eye can see. There are other diversions too before curtain-up, such as a trip on the vintage bus through woods to the walled gardens, the borders bursting with colour and fragrance.

Afternoon tea is served in the grand marquee overlooking the fine cricket pitch while the champagne bar has magnificent views over the estate to enjoy.

After the performance paths are lit with torches and fairy lights to guide everyone safely back to the car park, providing a magical end to the evening.