American songbook was great — down to the final consonants! 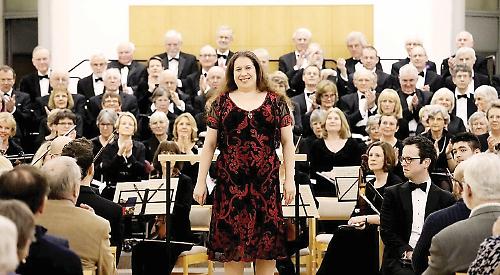 It started and ended with Cole Porter’s unforgettable Anything Goes — most appropriately as things turned out!

The choir’s recently-installed new conductor, Ellie Calver, had decided to break free from the society’s usual offerings of great choral masterpieces and to venture into pastures new.

Accordingly she had made her own choral arrangements of ever-popular showtime songs such as George and Ira Gershwin’s It Ain’t Necessarily So, The Man I Love, Summertime and I Got Rhythm.

Contributions from Rodgers and Hart were My Funny Valentine and Have You Met Miss Jones?

With the exception of Summertime, where the harmonies failed to settle, these home-grown choruses served very well in enabling the choir to show off what it could do, USA-style.

It is difficult enough to train most amateur choirs to enunciate their words clearly at the start of each phrase — but to get them also to sound their final consonants together is almost unheard of! The new repertoire and recent coaching appear to have paid off handsomely.

Particular chorus highlights of the evening were Can’t Help Lovin’ Dat Man by Jerome Kern and Walk On By from the works of Burt Bacharach and Hal David.

Throughout the concert, the choir and solos were expertly accompanied by the pianist Arthur Bell, who also contributed the evening’s longest item, Gershwin’s Rhapsody In Blue in an arrangement as a piano solo.

He received rapturous and well-deserved applause for this feat of pianistic pyrotechnics, but it has to be said that the piano reduction was most unrewarding.

The essence of Rhapsody in Blue lies in its instrumental colours and the trading of melodies and complex jazz rhythms between the players — be they a jazz band or a full symphony orchestra. These trade-offs became completely lost in the monochromatic and repetitive piano reduction — like watching a blockbuster technicolour movie in pale shades of grey.

A delightful element of humour was injected into the programme when the conductor abandoned her invisible baton for a while and sang The Alto’s Lament by Zina Goldrich and Mary Heilser. This met with laughter and much applause.

Earlier, she had shown the warmer side of her voice with the solo Second Hand White Baby Grand — a heartfelt, wistful offering by Marc Shaiman and Scott Wittman.

Towards the end of the concert, not satisfied with training the choir, Ellie Calver focused her coaching talents on the audience and soon had them singing Moon River by Henry Mancini and Johnny Mercer.

Then, with All That Jazz by John Kander and Fred Ebb, we moved on to competitive singing between those seated on the balcony and the also-rans on the floor. We sophisticates on the balcony won, of course.

As Ellie admitted, it was like school choir practice on a Saturday morning. But what a teacher!