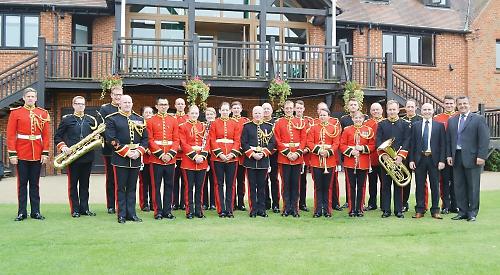 STUDENTS at Shiplake College took part in a concert with members of the Queen’s own Band of the Household Cavalry.

Hundreds of people attended the event in a marquee in front of the college.

The concert was organised by the college’s director of music Richard Curran after students visited the band at an open day in Kensington in November. The pupils, who were joined by students from Gillotts School in Henley and Queen Anne’s School in Caversham, spent the morning in a workshop with the band planning the music they were to perform in the afternoon.

Pupils from Shiplake and Peppard Primary Schools, St Mary’s School in Henley and Hemdean House in Caversham also attended. Mr Curran said: “We had a great morning and felt like we wanted to establish a link, starting with this musical extravaganza. We are looking to further this connection and to have an even bigger spectacle next year.”

Captain James Marshall, musical director of the band, said: “We want to give youngsters a career option by getting them to sit and perform next to musicians and get a take on life as a military musician. We also want to foster music in young people because there’s less and less going on in this country.

“If we can do anything to assist in bringing music to young people, who are our future, we want to do that.”

About 20 members of the 60-strong band attended the evemt, while the rest were at the changing of the guard ceremony in Windsor.