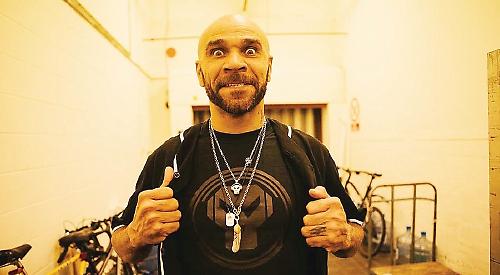 The maverick innovator, who rewrote the future of the jungle scene with landmark releases that still sound like they were kidnapped from tomorrow, has a unique story to tell.

Born Clifford Joseph Price in Walsall in 1965, he was put up for adoption and raised in children’s homes and by foster parents.

Through his involvement in an early-Eighties breakdance crew he initially made his name as a graffiti artist — later enjoying stints in New York and Miami.

An iconic producer, artist and actor, he is also something of an alchemist — adept at blending all manner of arcane ingredients to produce something new and unexpected yet strangely timeless.

Timeless, of course, being the title of the original, explosive 1995 drum and bass album with which Goldie made his name as a musician, detonating tunes that saw the backstreet genre gatecrash the mainstream pop party.

Since then, few if any doors have remained closed to him. In 2012, the Queen’s diamond jubilee year, BBC Radio 4 named the artist among 60 “New Elizabethans” who had helped shape British culture during Elizabeth II’s reign.

Now it is the turn of the Henley Festival audience to see what the fuss is about when Goldie and the Heritage Orchestra headline the floating stage tomorrow night (Saturday).

A festival spokesman said: “Goldie’s Timeless still stands as not only one of the finest albums in drum and bass but electronic music as a whole.

“Its symphonic arrangements and sweeping atmospherics make it an ideal candidate for live performance — something that was realised on an epic scale with sold-out shows at the Royal Festival Hall as part of the James Lavelle-curated Meltdown Festival in 2014 and a performance at the Wilderness Festival in 2016.

“Produced by Chris Wheeler and conducted by Simon Dobson, the show will see the album rendered with a full orchestra, band, choir, electronics, and feature Vanessa Haynes on lead vocal.”

Founded in 2004, the Heritage Orchestra — which ranges in size from 30 to 60 players — is known for its collaborations with contemporary artists from both the mainstream and experimental worlds of music and art.

It has previously worked with the likes of Gilles Peterson, John Cale, Jamie Cullum and Tim Minchin, and notably staged a performance of Vangelis’s Blade Runner soundtrack at the Royal Festival Hall as part of the 2008 Meltdown Festival curated by trip hop legends Massive Attack.

You get the impression that part of the secret of Goldie’s success is that he refuses to be intimidated by any challenge — or to be limited in any way by the dyslexia and synaesthesia with which he has been diagnosed.

On the classical front, this saw him come runner-up to Sue Perkins in the 2008 BBC reality TV show Maestro, in which eight celebrities learned to conduct a concert orchestra.

He says of his involvement in the show: “I wanted to prove a point because I knew that I could do it despite the fact I couldn’t read music. I proved them very wrong.”

Not that it was all plain sailing.

The experience parallels the way Goldie goes about composing his own music. “I will already have the painting in my head,” he says. “I never go into the studio with a blank canvas.

“I draw them out on a legend, usually. I’ll use a black line and different coloured pens. Each colour will symbolise different elements of the orchestra. From the drawing I’ll build up the music.

“I can’t write music note for note but I can read a score and I know where the highs are.

“I can sing and record a sound and then my notator will write it in notes and I will look at it as a photograph.

“Being dyslexic I can read the shape, so I can change the shape and for instance bring the cello into the low part.

“I’ve never been able to play any instrument. I can play a few notes on the ivories but I can’t play a score or Blondie’s greatest hits.

“I can get players in and tell them exactly what to play. There’s a big difference — I don’t have any barriers, any inhibitions.

“There’s something quite unique about my position because I can write any type of music in the way I want to write it. I will literally just sing it and record it.

“Friends can be baffled about it but I’ve worked with a trained team for a while, including John Altman, who’s worked with the greats and produced film scores like Titanic.

“He helped me with Mother [the hour-long opening track on Saturnz Returnz, the 1998 follow-up to Timeless]. ‘Let me hear it,’ he said. He heard it and said ‘I get it’ — and he couldn’t figure out how I worked it out.”

Looking ahead to tomorrow night’s concert, Goldie said he had been approached and asked to take part by one of the Henley Festival’s organisers who had been “blown away” by an earlier performance of Timeless with the Heritage Orchestra.

“I questioned ‘Is it going to be good for your audience — are they really going to get into that?’ he admits. “It’s a very uptight get up and go sort of thing, I get that.

“I’ve done the festival hall with Sine Tempore, I’ve done some really quite prestigious events. But in between Ronnie Scott’s [where he played earlier this year] and the Albert Hall [where he will be performing in the BBC Proms later this summer] is the festival and, yes, it’s a really prestigious thing but I can deal with it.

“I think my music grew up a long time ago and I think a lot of people who came from the Nineties have heard of me — they know of me. I’m not in Chaka Khan territory but I certainly have been part of British culture and music. It’s a very exciting show, to be fair.

“Following a trend is not something I’ve really done — I’ve created trends. Every man and his dog is trying to do a classical rendition of something that came out in the Nineties. We were the first to do it.

Unsurprisingly, Goldie is unfazed by the prospect of performing his music outdoors and close to water rather than in a concert hall or club. “I think the music is what it is. It can be played anywhere as long as it sounds right technically here. The effect of surrounding by water is like being in a mother’s womb — that’s the real water I’ve been charged by. It doesn’t matter — it’s a good environment. It might be that this is the right environment. It feels right. It’s all very new.”

Reflecting on his musical journey over the past decade, he adds: “I wanted to do [Maestro] with my own music. I wanted to get a conductor to conduct to keep it straight and I get up on stage and work with the different elements.”

Goldie says his role in the performance itself will be to direct the drummers.

“I was stuck between two worlds. Do you want to conduct your own music? No, you can keep the conductor for the orchestra and I’ll get amongst the music. Drums being central to the piece and the structure.

“I’ve always loved classical music. It’s been with me all my life as much as rap music — I’m one of those oddballs who’ll listen to Borodin or Górecki and then jump to UB40 or Studio One or into punk, Stranglers, into soul music. A really wide palette of music.

“As a painter you always need fuel for your fire when you’re painting and having a very wide breadth of music has allowed me to explore that more.”

“I’m just about the arts — I love to be that. A young person can come to Southbank hearing Timeless with an orchestra and they feel like they’re climbing over a wall erected by the classical people while the classical world has been holding them off. Now the classical world is thinking ‘Why can’t we make new classical pieces?’ Would Rachmaninov be rolling in his grave hearing his music over and over again? We don’t know — he might not like his music being reworked.”

Bearing the above in mind, there is one point he wants to make about how he envisions the Henley Festival concert.

“This is by no means classical music,” he says. “This is taking electronic music as a blueprint electronically, notating it and having an orchestra play it — an orchestra like the Heritage that grew up on my music.

“They’re all seasoned players that have played the classics — Rachmaninov, Beethoven — they’ve sharpened their teeth on that stuff but there was something else that they needed as players.

“I think it’s exciting. Look at Jonny Greenwood and Radiohead — some of those classical compositions are amazing. I think there’s room for it — the generation has grown up now, despite the Nineties seeming so close, but it’s a long way off. It’s a 20-year journey.”

With so many strings already to his bow, what’s next for Goldie?

“I’m going to carry on creating art,” he says. “With my own label [Metalheadz], I’ve never had a set-up like it.

“I was playing music at the weekend in Liverpool to a crowd of kids that I’ve got socks older than and I’m not playing old music — I’m playing cutting edge underground drum and bass music, from my own label and from a set of labels that I stand by.

“I can then take that music, take it into notation and then an orchestra can play that music.

“I can then expand it and put it in a 180-piece choir and orchestra and play the Carnegie Hall. I’ve done all these different exercises and I know I can do that. I’ve played the Albert Hall, I’ve done long compositions. Mother is an hour long.

“I don’t know any other artist that can do that. I’ve not attached to any particular field by default. It’s alchemy.”

l Tickets for this year’s Henley Festival start at £45. To book, visit www.henley-festival.co.uk