4am girls are fresh as ever 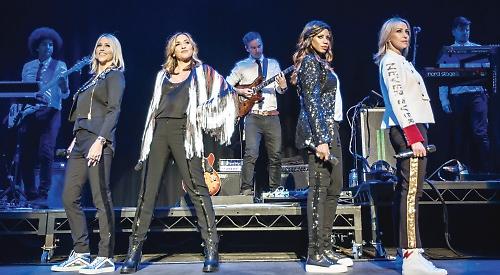 IT could be said that there was a shared cultural legacy uniting both of Sunday’s Henley Festival headliners.

Both girl group All Saints and former Spice Girl Mel C could at various times in the late Nineties be snapped stumbling out of the Met Bar on London’s Park Lane at 4am.

But far less trivially, both acts had, at one point or another, elicited the producing chops of William Orbit, whose ground-breaking knob-twiddling skills and ability to conjure up unique soundscapes for clients including Madonna went on to define an era of crafted pop, right on the back of the guitar-based Britpop frenzy. With its Orbit-produced opening track, Melanie C’s brilliant triple-platinum selling 1999 album Northern Star still holds up.

Its combination of
co-written catchy, yet deceptively simple melodies and honed lyrics makes for both a pleasing and thought-provoking listen in equal measure.

While some might be more familiar with her appearances as a reality television judge, such as in Superstar, Mel C has continued to pursue her career as a solo pop artist, with seven studio albums to her name.

Despite a less than full lawn and grandstand attendance, this consummate professional rallied an initially low-energy audience to her cause.

Bounding enthusiastically from one end of the stage to the other with emphatic dance moves, she pounded through a carefully constructed setlist, which included Anymore and Dear Life from her atmospheric 2016 album Version of Me.

Her cover of Sia’s Cheap Thrills stirred the crowd to yell out the title chorus back at her, and her version of Bryan Adams’s anthem When You’re Gone (her first post-Spice Girls recorded outing) was warmly received.

But most anticipated of all, and certainly garnering the greatest of crowd cheers and spontaneous singalongs, were the numbers from her aforementioned Northern Star album: Never Be the Same Again, the title track, and the frenetic I Turn to You to close.

Her impassioned hammering on an 18-inch tom-tom centre-stage on the latter brought a fitting conclusion to the 10-song set.

After a short interval the Appleton sisters Nicole and Natalie, Melanie Blatt and Shaznay Lewis took to the stage — the original line-up of All Saints, and as reformed in 2014 after a second split in 2009.

Still one of the most successful girl groups of all time, their 1997 debut album All Saints included three UK number one singles, and was followed by their first chart-topping album Saints and Sinners in 2000.

With all four taking their rightful places in line for opener I Know Where It’s At, this black-suited gang looked as attractive as ever, with figures belying their age and voices clearly in check.

Slaloming in between each other in free-spirited dance routines and taunting the crowd with cheeky asides, the group kept the public on its feet for the duration.

No All Saints setlist would be complete without the three-minute bestsellers Never Ever, Under the Bridge and Bootie Call, and the girls delivered in spades.

One of their finest singles, Black Coffee sounded as fresh as ever, and works from their return-to-form 2016 album Red Flag, the emotionally shocking One Strike and reflective Puppet on a String, suggested there’s plenty of life in the quartet yet.

Mel C joined for the finale — a plucky performance of arguably All Saints’ most important contribution to the pop lexicon, Pure Shores, commissioned for Danny Boyle’s film The Beach.

With stunningly crisp sound production and attendees obviously delighting in the experience as much as those on stage, this was both a rousing and pertinent send-off for the last night of 2017’s Henley Festival.