Queen of funk has no Prince 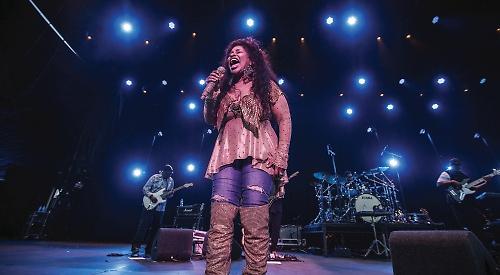 EVEN at the ripe age of 64, Chaka Khan, the “Queen of Funk” herself, careered youthfully on to the floating stage at the Henley Festival to appreciative roars from champagne-fuelled revellers on Friday night.

Clad in gold-sequinned top and matching knee-high boots, her instantly recognisable shrieking voice must surely have carried well beyond the boundary of the Regatta race course markers, and its armada of attendant boats.

The Chicago-born vocalist, best known for a succession of disco hits from the Seventies and Eighties, first as frontwoman with funk band Rufus, and subsequently as a solo artist, has gone on to snap up no less than ten Grammys, and sell some 70 million records worldwide.

Her ability to flourish, despite not uneventful personal and professional lives, and diminishing popularity after her heyday, is testament to her sustainability as an artist.

A short way into the set, Khan treated the audience to the 1974 Rufus-era jukebox staple Tell Me Something Good, drawing the first of the festival lawn ticket-holders to their feet and clearly encouraging passengers on river-borne vessels to join in the fun.

The prerequisite loo break song fell sadly upon the Bruce Hornsby-penned Love You Still, easily the most beautiful ballad of the evening and one of its high points. The after-work crowd, with impatient murmur and rumble of shifting in uncomfortable seats, drowned out the piano and the diva’s mellow but convincing treatment of the material.

Then came half-time, as the charismatic singer left the stage, presumably to reset the vocal cords and allow time-out for a wardrobe change.

This gave her vice-tight band a chance to noodle for 10 minutes or so. Melvin Lee Davis presided over the session with melodic plucking of his eight-string bass, while the drummer banged out an inspired and focused solo.

Some in the audience would have been disappointed not to hear Chaka Khan’s Prince-penned signature tune I Feel for You, but her erstwhile public declarations that she is “bored” with the song might have warned expectant fans.

However, no one could possibly have felt left out during the two-song finale beginning with I’m Every Woman, during which every woman in the crowd was indeed not only on her feet but spilling out into the aisles too. Meanwhile, every man present looked less sold on the song’s message.

That left it to the 1983 hit Ain’t Nobody to close out proceedings, and included unison chanting of the chorus by all listeners on both land and water.

Despite a flimsy firework display flanking the stage as the band retired, the black tie and evening dress-attired horde subsequently bobbed contentedly toward the exits.