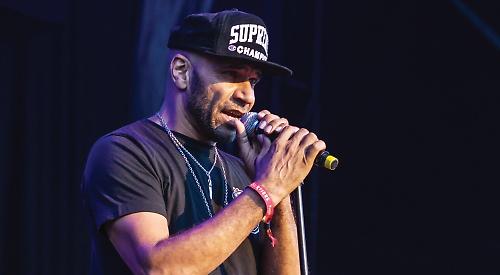 THERE are certain genres of music that are like Marmite — you either love them or hate them. Drum and bass, despite its infiltration into many mainstream tracks, such as All About That Bass by Meghan Trainor or Plan B’s Stay Too Long, is one of those genres.

It’s music that many feel physically, the sound waves hitting your chest, and it could be that physicality that attracted a lot of men to Saturday’s concert.

Drum and bass is gritty, produced against a backdrop of high-rises and concrete playgrounds.

This was never going to be a concert with polite rows of black-tie dressed audience.

This was a physical concert, an evening by the river on an amazingly warm summer’s night, complete with full moon, where 50-year-old men could let off steam like 21-year-olds again.

There was a mosh pit. People got up and jumped around and security didn’t stop them because nobody felt threatened. Those who didn’t have lawn or grandstand tickets hugged the barrier and the sound carried down the river so those sitting at Upper Thames Rowing Club could feel the music and dance away.

Goldie is very much an egalitarian. Everyone he works with he praises equally and he introduced everyone who sang, as well as those playing, as if you they would instantly be a good friend.

He spoke about the fact he could be on a beach somewhere celebrating the wedding of Amanda and Adrian that night, as if he was talking to a close friend.

One of those who taught him to conduct on the Maestro TV series was dancing in front of the stage and he remarked he had a beard.

He shook people’s hands and fist-bumped and sang and posed. He encouraged the drummers, who were right at the front of the stage, next to the conductor, in parallel with the first violins, again and again to keep the beats up, just like a cox would do a crew racing towards a place in a Henley Royal Regatta final, as had happened exactly seven days previously.

The set started with more recent songs and tracks from his new album, The Journey Man.

Tyler Lee Daly, who could be a boyband all on his own, wearing a James Dean leather bomber jacket, sang Castaway.

Timeless and City Life were the crescendo in the middle of the set, with Vanessa Haynes singing a soulful haunting version of these tracks that helped define the Nineties.

There was smoke, there was a stunning light show, but fundamentally there was the power of the bass that got people jumping up and dancing, resulting in at least one pair of broken heels in the audience.

I’ve never been to the festival despite having lived in the town for 10 years, because of the price of the tickets. I have, however, in previous years come down to listen and watch the fireworks.

The latter were much more restrained this year with great flame throwers either side of the stage instead. Henley residents will be a little disappointed in that respect.

I was pleasantly surprised by the periphery acts – the Comedy Club was an interesting, unseen from the river, jewel, where you could be two rows back from a town councillor, have very different opinions about the jokes and still have a great evening.

There were acrobats and jazz and a disco which, after the main set, was absolutely crammed.

The unsung hero of the festival has to be Ruby Turner. A British soul singer, she sings the songs you didn’t realise you knew the words to.

There was also coffee and if you just wanted to sit and chill by the river in the moonlight with a glass or two of something you could, without any fuss.

The art should also be mentioned. Goldie is a prolific artist and has produced cutting edge contemporary work. His self-portrait is disturbing and memorable. I dare you not to think it’s about to speak to you.

I like his artwork but then I’ve got some very similar stuff at home that I was given in lieu of debts from my ex Hayes Hopkinson www.hayeshopkinson.com