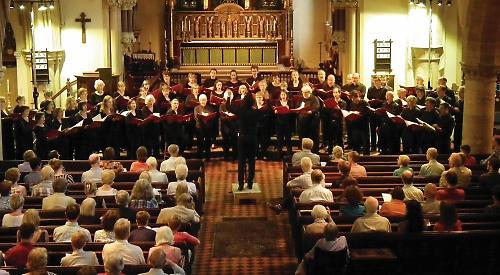 For as well as it being the finale of the choir’s 50th anniversary season, it was also the last concert with their esteemed conductor, Matthew Hamilton, who was taking his leave after a
seven-year tenure.

The chosen programme for such a commemorative event was ambitious and wonderfully varied, with music from the English and German choral traditions.

Unaccompanied throughout, the choir tackled the challenging works with relish and commitment, and delighted the warmly appreciative audience.

They opened with Benjamin Britten’s Hymn to St Cecilia, a work described as “a strange beast” by the conductor in his introduction.

The choir captured the dance-like character of the music, singing with rhythmic precision and clearly emphasising the text of WH Auden.

The basses sang with a particularly impressive tone from the start and there were effective solos drawn from each section of the choir.

In Nico Muhly’s I cannot attain unto it, RBC coped with the complex textures and swift shifts of harmony. However, they showed even greater skill in their treatment of Schönberg’s demanding work Friede auf Erden (Peace on Earth).

In this dramatic and emotive piece, the choir portrayed the struggle and conflict convincingly, with crisp attack and appropriate aggression.

Throughout, Maestro Hamilton conducted with clear, expansive gestures, moulding the choir successfully through the expressive contrasts. It was a powerfully emotional end to the first half.

Following the interval, Thomas Tallis’s Spem in alium, the famous 40-part motet, was performed with the choir members standing on all four sides of the packed minster nave, encircling the audience.

This resulted in a pleasing aural effect, so that one could hear the interplay between the individual voice parts, as well as antiphonal effects between groups of voices.

It was certainly greatly appreciated by the audience, and extended applause followed. For the final two German works, RBC returned to the front of the nave, albeit in different formation to the first half, which I felt improved the blend of the choir as a whole.

In Brahms’s Fest- und Gedenksprüche, there were moments of excellent diction, and the choir embraced the Romantic composer’s rich harmonies, displaying a good variety of tonal colour and expression.

To conclude, Bach’s Der Geist hilft was sung with confidence and energy, with the text clearly articulated.

In the final “Halleluja” all eyes were lifted from the score to watch the conductor, bringing the work to an intense and moving conclusion.

RBC chair Paul Sutton then made a touching valedictory speech for Matthew Hamilton, praising him wholeheartedly for his superb musicianship, as well as his skill at devising imaginative programmes.

The celebratory mood was tinged with the sadness of his departure, judging by the faces of many of the singers.

The final Bach chorale was repeated as an encore, a fitting culmination to a marvellous occasion.