Prop stars have still got magic 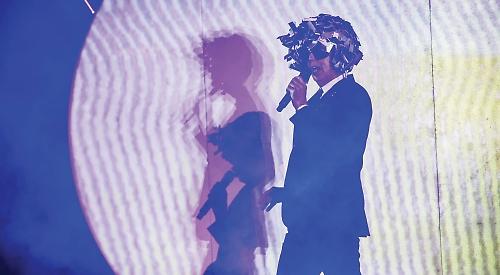 WHAT do the Pet Shop Boys mean to you?

It’s fairly safe to ask that question given that Neil Tennant and Chris Lowe have sold more than 50 million records in their
four-decade career.

On Thursday night, at least, the Pet Shop Boys meant a barnstorming pop party that had much of the Henley Festival lawn and grandstand on their feet for long stretches of the evening.

While most acts would be content to walk on stage and wave to the crowd, the synthpop duo had something else in mind.

Cue lights. Cue music. And a pair of apparently innocuous large white discs on either side of the stage that looked as though they might be subject to a visually dazzling video projection at some point in the evening.

Prop stars, if you will.

Then, of course, they swung round to reveal Tennant and Lowe. Had they been there all this time? It didn’t matter. Magicians never reveal how they do their tricks, but right away the pair were keen to remind us of their credentials.

Opportunities, their third single, deliciously satirised the Thatcherite enterprise culture of the Eighties while at the same time helping irrevocably to define it.

Being part of the thing you take aim at is what one former Henley MP would recognise as being akin to his widely disseminated policy on cake — pro having it and pro eating it.

But then the Pet Shop Boys have never limited themselves. Their work encompasses dance music, pure pop, and lushly orchestrated album tracks. They collaborated with Derek Jarman on stage shows and videos, made a film with Jack Bond, and — if such a thing is possible — produced definitive cover versions of songs by Elvis and the Village People. They even beat the Pogues’ Fairytale of New York to the Christmas number one.

So if they made playing Henley look easy, nobody should really have been too surprised.

Masters of stagecraft, they were backed by a dazzling array of visual projections and lighting effects, with hedgehog-style lasers firing off into infinity.

A series of “reveals” included the removal of the stylish space helmets they arrived on stage wearing. They were also joined by drummers and other band members, including a violinist, wearing Daft Punk-style helmets.

If I didn’t quite have the energy to stand for the whole show, there were many around me who were up and dancing away throughout.

Opportunities B-side In the Night — for years the theme to The Clothes Show — had everyone in the capacity crowd jigging about, to the point where our bit of the grandstand was vibrating beneath our feet. New York City Boy had a similar effect before there was a brief lull.

Everyone was just settling back into their seats when the opening bars of West End Girls rang out and they all sprang back up again.

Then it was time for It’s a Sin to take the roof off. Even the bits that didn’t have a roof. The band’s second number one, I had always been slightly agnostic about it. Live, though, the song’s sweeping power and regretful majesty was wholly manifest. Even I got the point.

Shortly afterwards we were treated to a snippet of Heart as a kind of disguised intro before the band launched into a rousing rendition of Go West that had the whole crowd singing along. The Village People themselves will do well to top it when the play Rewind later in the summer.

Seasoned crowd-pleasers, we didn’t have long to wait for the encore. Domino Dancing off “difficult third album” Introspective was a delight and had my neighbour nodding along appreciatively before Neil and Chris signed off with Always on My Mind.

What do the Pet Shop Boys mean to me? They are artists. They are storytellers. They are magicians. And, yes, they are stars.