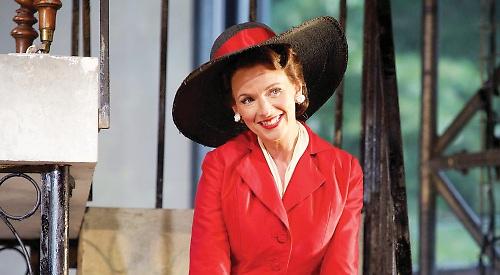 A DULL, though thankfully mild, midweek evening may have made Garsington’s
pre-performance attractions at Getty’s Wormsley Estate less inviting than usual, but this was more than compensated for by the ensuing on-stage feast of singing, dancing and humour.

Rossini’s Il turco in Italia, strongly influenced by that master of the genre, Mozart, is no exception. And in this revival by director Martin Duncan of Garsington’s 2011 production, there was not a fault-line to be found.

The mature Geronio, married to the younger, eminently fanciable Fiorilla, is pained by her incessant philandering.

Courted openly by the struggling Narciso, she then falls for the soon-to-disembark Selim, a travelling Turkish prince, who is subsequently revealed as slave-turned-astrologer Zaide’s former lover, whom she had hoped to marry.

In these shenanigans, local poet Prosdocimo sees ample material for a play and, as narrator-cum-author, attempts to manipulate its dénouement.

Selim is torn between his two objects of desire, while Geronio schemes to win Fiorilla back.

The scenario for this is a masked ball, where the lovers, dressed as three identical Selims and two Fiorillas, end up in the wrong pairs of arms.

Selim finally chooses Zaide and sails off with her into the sunset, leaving Fiorilla, panicked by Geronio’s trick divorce papers, to repent. Geronio forgives her and takes her back.

Sarah Tynan as Fiorilla proved to be not only an amazing coloratura soprano but an extremely accomplished actress — she simply stole the show.

Memorable arias included the Fiorilla/Geronio duet in act one, elevating their relationship to one of high tragedy; Narciso’s intense solo aria Tu second ail mio disegno; the duet between Selim and Geronio, in which the price for Fiorilla was proposed; and the later, impassioned confrontation between Selim and Fiorilla ending with the cry “I love you”. And there was, of course, the celebrated quintet Oh, quadrate che accidente, uniting all five principals.

The set, designed by Francis O’Connor and complemented by Mark Jonathan’s lighting, was ingenious and witty.

The Fifties Italian style of dress was a good choice. The chorus sang and danced impeccably, their costumes a blaze of stunning colours. And the Garsington Opera Orchestra, under conductor Chris Hopkins, was at its customary best.

One could not have asked for more.