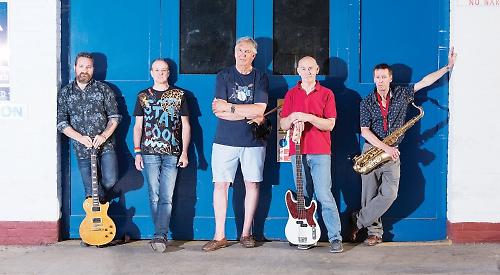 A GROUP of musicians who met at the monthly Henley Jammers jam sessions that started up nearly two years ago are to play their first gig on Wednesday (July 26).

KAOS formed just over a year ago at the sessions hosted by guitarist Steve Blackall and sax player Bryan McCrae — both of whom are now members of the band.

which showed in their complementary playing styles.

They also grasped that instrumental biased blues-rock had largely disappeared from the live scene and was ripe for a revival.

So in the summer of 2016 KAOS came together for their first session in Stoke Row. The band’s style has been described as “Pink Floydesque with a heavy dash of Gary Moore, Colosseum, Camel and Led Zeppelin brought up to date with modern rhythms and sounds.”

Guitarist Steve Blackall has played with Jeff Beck, John Mayer, Sheryl Crowe and others back in the day and describes himself as carrying Gary Moore’s style on his sleeve with a heavy rock/blues bias.

Keyboardist Nick Brown also plays alto sax and has played the folk club circuit in the past, both as a solo performer and in bands. His key influences are blues/rock, modern jazz and trad/electric folk.

Bassist Pete Krueger is well known in the Henley area, having played in Outalyrix, Fair Exchange, Antz Avenue, Webbsight, Goin’ Loud, the Vincent White Band and his own band, Krueger.

KAOS are now preparing to play their “launch gig” at Nettlebed Village Club on Wednesday. Tickets will be available on the door rather than in advance and are priced £10 (concessions £7). Doors open at 7pm with the band due on stage at 8pm.