Choir turned opera singer is ready for the big stage 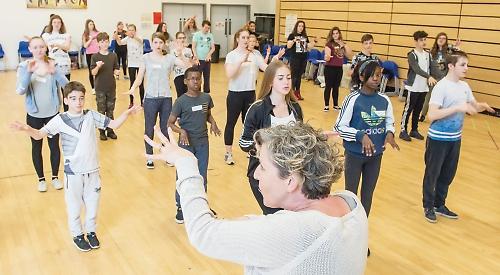 A FARMER from Hambleden is among an 180-strong cast preparing to bring this summer’s Garsington Opera festival to an inspiring conclusion.

Ben Keene is a member of the chorus of Silver Birch — a “people’s opera” commissioned as part of Garsington’s learning and participation programme.

The 47-year-old is a member of Hambleden Church choir, which as well as regular services also performs at weddings and on other special occasions — including the church’s annual summer tea party.

This year, however, Ben is having to give the tea party a miss as he is busy rehearsing for the three evening performances of Silver Birch that will run from Friday, July 28, to Sunday, July 30, starting at 7.30pm each night.

Written by Roxanna Panufnik with a libretto by Jessica Duchen, the opera explores the power of love in wartime and incorporates war poetry by Siegfried Sassoon, some of which he wrote while staying at Garsington Manor near Oxford — the festival’s original home.

Today, Garsington Opera runs for around two months each summer at the Getty family’s Wormsley Park estate near Watlington, having moved there in 2011.

Ben’s involvement in Silver Birch began in autumn last year when he attended an audition of sorts for the production’s adult company.

“Well, they weren’t called auditions because that sounds a bit sort of scary, but they had a couple of workshops that we all went along to — and then to find out more about it.”

He explained that one of his fellow Hambleden choir members had previously spoken about her experience of taking part in Road Rage, Garsington’s first community opera, back in 2013.

“There’s about 40 of us in the adult chorus so we kind of work as one, mostly, and sing things together. I’m not singing any solo parts but I sing with other men.

“There’s about 16 men and then maybe 25 women. In the background we do a lot of singing, but we also do acting as well, so we’re moving around on stage and interacting with each other and other people.”

Ranging in age from eight to 80, the Silver Birch company includes professional singers and instrumentalists, child soloists (one of whom, Sacha Smith, goes to school in Frieth), children from seven primary schools in the area, a youth company of singers and dancers aged 10 to 20, the adult company, student instrumentalists, a team of Foley artists responsible for acoustic sound effects, and representatives of the armed forces community.

So far, at least, Ben, who sings bass, has been impressed by his experience of working on the production.

“It’s quite good because there’s not too much pressure on you. There’s plenty of opportunity and time to learn the parts and we’re all sort of singing together so it doesn’t matter too much if you get a little bit wrong.”

Weekly indoor rehearsals have been ongoing since the start of May, but these have now been stepped up to two days at weekends.

Wormsley Park’s award-winning opera pavilion, where Silver Birch will be performed, is now doubling as the rehearsal space.

“And now we’ve got the conductor, Douglas — he’s with us today and obviously he’s really quite skilled. They’re all really good, but when you get the coaching by someone like that it’s really quite inspiring.”

Silver Birch librettist, the novelist and journalist Jessica Duchen, described working on the production as “the fulfilment of a dream”.

She added: “This creative process, deeply collaborative at every level, has been entirely new to me, and it’s one of the most exciting and rewarding experiences I’ve been lucky enough to encounter.

“The theme is the impact of war on soldiers and their families, tying together Siegfried Sassoon’s First World War poetry and the experiences of those serving in modern warfare.

“It is designed to appeal to opera regulars and first-time attenders alike. It is fast paced and action-packed — emotions run high and Roxanna Panufnik has written some incredibly beautiful music, as well as letting her hair down a bit in the battle scene!”