From the Beatles to Bastille at school's summer concert 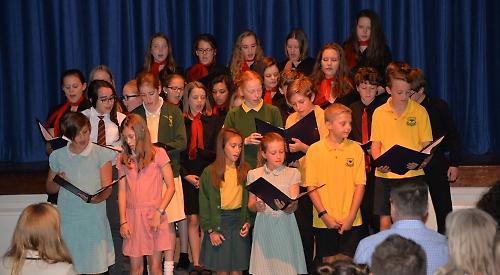 DOZENS of children took part in a music concert at Gillotts School in Henley.

Children from Badgemore and Valley Road primary schools in Henley also took part, together with pupils from St Martin’s Primary School in Caversham.

Each performer was introduced to the audience of about 100 people by the school’s two head girls, Kiri Cheeseman and Helena Porter.

About 40 students took part in the concert, including the technical support team of Charles Washbourn, Matthew Bennett and Ellis Tubb.

Songs performed on the night included Can’t Buy Me Love by The Beatles, Somewhere Only We Know by Keane and Read All About It by Emeli Sandé. The finale saw all the singers come together for a rendition of Pompeii by Bastille.

Frances David, music subject leader at the school in Gillotts Lane, said: “The evening featured many talented students performing as part of ensembles as well as soloists, duets and small groups.

“Helena Porter and Kiri Cheesman took on their first engagement as head girls by commentating throughout the concert, introducing acts and giving the audience insight about the performers. Having not had a rehearsal with all students until the final piece, they did an incredible job remembering dynamics and articulation.

“We are incredibly proud of what our students achieved and were very grateful that we had an audience of over 100 people that included our local MP John Howell and the Mayor of Henley Kellie Hinton.

“It was a great atmosphere and the perfect evening to round off the school year. We are looking forward to holding many more successful events like this in the future!”