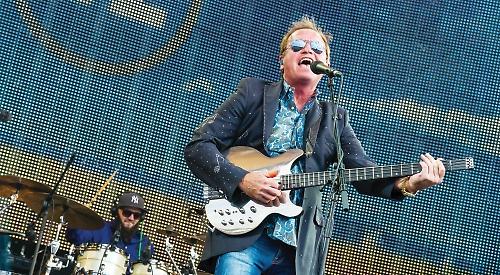 THE royal regatta’s rowers have reached the finish line and the Henley Festival’s floating stage is safely back on dry land for another year — but at least one more major riverside treat remains in store this summer.

Now in its ninth year, the Rewind festival is an annual celebration of Eighties pop music that has become a firm fixture in the Henley calendar.

Held at Temple Island Meadows, this year’s Rewind South — to give it its full name — takes place over the weekend of August 19 and 20.

Camping starts on Friday, August 19, with music on the Saturday and Sunday and a rapturous crowd of 20,000 dayglo-clad music lovers expected on each of the days.

Hits to listen out for include Lessons in Love, Something About You, Running in the Family and The Sun Goes Down (Living It Up).

Bassist King and keyboardist Lindup, who also share vocal duties, will be joined by guitarist Nathan King — Mark’s younger brother — and saxophonist Sean Freeman, both of whom have been on board since 2001, when the band reformed following a seven-year hiatus.

Drummer Pete Ray Biggin joined the line-up in 2010, and recent years have seen Level 42 continuing to tour the UK and Europe, making regular festival appearances along the way.

They first played Rewind in 2010, only the second year it had been held and back when it was still a Henley-only event.

Then after playing sister festival Rewind Scotland in 2013 they returned to Temple Island Meadows the following year, while also making the trip to Cheshire to perform at Rewind North.

As Mark King makes clear, he is a big fan of Rewind and everything it represents.

“It’s a fantastic way to spend a weekend,” he says. “In the last five or six years it has grown into a massive event. It’s such a good festival and the organisers do it so well.

“To be able to stand on the stage looking out at the crowd and seeing the effort they have put in with the different outfits and having a great time is a privilege.

“The line-up this year is fantastic. Every one of the bands at Rewind are different and the fact that we can still do this now is an absolute blessing.”

There seems to be a magic about Eighties music that keeps drawing big crowds to Rewind year after year.

“People still miss Top of the Pops,” says Mark. “BBC Four still show Top of the Pops from the Eighties and that is proof if any was needed of how popular Eighties music still is.

“The Eighties was such a broad church of music and there were so many stars to choose from. That’s one of the reasons why the music is still going strong today.”

Mark remains eternally grateful to fans of Level 42 and Eighties music in general, and says that support is responsible for driving the boom in the popularity of retro music festivals.

“I get a buzz out of standing on stage, banging out the songs, and seeing the reaction from the crowd.

“We’ve been touring with UB40 and it’s brilliant that it’s not just Level 42 fans that we are playing to. The festivals are being so well supported and that’s a real bonus for me.”

Apart from playing at festivals like Rewind, what’s next for Mark and Level 42?

“More of the same. We’ve been doing this for 37 years and there’s no reason for us to stop. We’re still here and trying to come up with new music. As long as there is still the appetite that’s great. We are proud of our fans — they’ve stuck with us.

“We are doing this almost on a weekly basis and it isn’t just about reminiscing. There is still a validity of being part of a band like Level 42. It’s what I love doing. It’s also about inspiring people and that’s one of the reasons we are still doing it.” Mark says he has seen huge changes in the music industry and the way music is promoted, but his core philosophy remains the same.

“The music business is almost unrecognisable now compared to the Eighties, but it has been a gradual process of change.

“Social media has had such a big impact on everyone’s lives — it’s an incredible freedom. Donald Trump can have one too many and write some nonsense on Twitter for the whole world to see.

“But I’m the same guy who was so excited about going on Top of the Pops for the first time. Nothing has changed for me — I still get a buzz out of playing.

“I’m not the sort of character who is all about getting a message across. For me it’s all about making and playing good music with friends and hoping that the fans like what we do.”

However, that’s not to say the everyday freedoms represented by an event like Rewind don’t resonate all the more deeply in light of recent events in Manchester and London.

“You bring along your kids who grew up listening to this music with you too, and everyone wants to have a good time,” says Mark.

“If you think about some of the vile things that have happened lately, this is one of the best ways we can stick two fingers up — by showing up at events like Rewind and having a great time and showing them that they won’t break us.”

The unity between artists and fans is something that remains very close to Mark’s heart.

“Our fans mean everything to us,” he says. “They’ve been there from the start, back when we were first trying to find our feet.

“We would put out a release in the early days and they would go out and buy it. They’ve been so important for us. They’ve been incredible — and they are the reason we are still touring.

“It’s not just about a band playing music — it’s also about the bond with the fans and the friendships that have developed between them. It’s very heartwarming.”