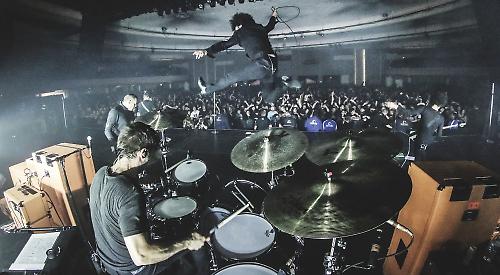 THE physicist and mathematician Henri Poincaré’s recurrence theorem states that certain systems will, after a sufficiently long but finite time, return to a state very close to their initial state.

Upholding this theory, it only took 15 years for Texas punk rockers At The Drive-In to return to the studio and record the follow-up to 2000’s seminal Relationship of Command.

Released in May this year, the band’s fourth full-length album, the intriguingly titled in•ter a•li•a, seemed to bear witness to the fits and starts of their history.

Formed in 1994, the El Paso five-piece released three albums and a number of EPs before splitting in 2001. More than a decade passed before they reconvened in 2011, but in the event their hotly anticipated reunion ran in its course after a year.

Happily for their many fans, a second reunion was brokered in 2015 and, following the release of their new long-player, the band will take to the Reading Festival’s main stage on Saturday, August 26 — where they are fourth on the bill behind Eminem, Major Lazer and Korn.

If, as Poincaré postulated, life does indeed have a circular current of sorts, it seems to have deposited At The Drive-In back at this point with the same post-hardcore sound and fury that helped define a turn of the century musical movement.

“We still get in the room and feel like it’s the first day,” says Tony. “When we get together, there’s this uneasiness, excitement, and youthful joy. We used everything we learned over the years, but we remembered that this is At The Drive-In.

“When it came to this band, we always likened it to a gang. That’s how we lived. To this day, I still feel that us against the world mentality. It works for us in the chemical equation.

“For all intents and purposes, we started in a garage. We played all of the basements we could and we moved up to kitchens. We’re still that band in our heads.”

“It was about getting back to that primordial self,” adds Cedric. “We essentially agreed, ‘We need to honour the last record. We need to go forward, be the core of what we are, and ignore everything we learned in our years apart.’ It was a great lesson in communication. We wanted to honour the fan base and the frame of mind of being young. Most of us have children. It’s very easy for me to access that wonder where there really shouldn’t be any rules.”

At The Drive-In’s beginnings can be traced back to Omar’s garage where the boys jammed for countless hours in 1993.

Moving from DIY underground shows to local clubs in El Paso, they quietly — if that’s the right word — built a loyal following.

The band’s debut, Acrobatic Tenement, arrived in 1996, followed by 1998’s In/Casino/Out and Vaya in 1999 — each of which saw quantum leaps in their sonic vocabulary and proficiency, amplifying the buzz around them and landing them on tours including an arena run supporting Rage Against The Machine.

The creative apex of their first seven years, Relationship of Command, released in 2000, quickly earned the reputation it holds to this day as one of the century’s most incendiary and influential albums.

But this barrelling momentum was to grind to a halt with the sudden announcement of a hiatus in 2001, with the band subsequently remaining dormant for a full 10 years.

Conversations about “new music” only began gestating when the quintet made their high-profile comeback as Coachella and Lollapalooza headliners in 2012. However, it took another three years of conversations, cultivating trust, and honing communication before they were ready to get down to serious business.

“In 2014, we got together and just talked 60 per cent of the time, while we put pieces of music together,” recalls Tony. “We accomplished a lot of moving ground per se and started digging the whole foundation. In October 2015, we decided that hell or high water we were going to do another album. People may have different impressions of what the right way to do this was, but it was our right way.”

At The Drive-In spent 2016 on their first proper tour since 2001. Their travels took them from a sold-out run in North America to explosive appearances everywhere from Denmark’s Roskilde and Splendour in the Grass down under to Summer Sonic in Japan.

During a nine-day spell in Seoul, South Korea, they finally hit their stride when the found themselves writing new music in a tiny rented studio.

“There was a disciplinary time frame in which we could work, because the studio doubled as a house for the guy who owned it,” says Cedric.

“We could only go from 10am until 7pm and we were really forced to go back to the way we used to rehearse. It was the same thing in 1996 at Omar’s garage. We’d meet in the morning and jam for a good chunk of time. It opened up the floodgates.”

Galvanised by the creativity in South Korea, the band landed back Stateside and took a short break before officially entering Hollywood’s Sound Factory studio to record what would become in•ter a•li•a.

Produced by Omar in tandem with Rich Costey, whose credits include Muse, Sigur Rós and Santigold, the sessions marked the first time a band member had helmed production for an the At The Drive-In album, while Tony would meticulously oversee the mixing and mastering. Burning through a series of incendiary takes, recording wrapped in under a month.

“I’ve never personally done a record that a bandmate was producing,” says Tony. “We all have so much trust in each other. We know what we’re good at and we put our trust into Omar. He stayed focused on the end result. It’s everything we hoped for.”

It’s everything audiences have hoped for as well. The band uncorked the first single Governed by Contagions back in December — and its ominous delivery, caustic musicality, and claustrophobic intensity proved a hit with fans and critics alike.

Elsewhere on the record, Incurably Innocent pits spacey phaser and thrashy riffing against a sidewinder hook and siren wail. “It’s a song about sexual abuse and being able to finally speak out,” admits Cedric.

The album opens with the thunderous chant of No Wolf Like the Present and twists and turns through a 41-minute whirling wormhole of pure poetic punk catharsis before climaxing with the cinematic intensity of Hostage Stamps.

“To me, it’s like walking through the hallway in some war-torn ghetto and reading the writing on the wall,” says Cedric. “Keep your ear to the ground and listen to the heartbeat of young people.”

The album title — Latin for “among other things” — proves utterly apropos.

“It’s a snapshot of life right now and the inevitability of where we might be headed,” says Cedric. “It reminds me of the last scene in Chinatown where Jack Nicholson is told ‘it’s Chinatown’ as an explanation for the nature of things.

“I don’t think it points a finger at any one source or cause. If anything, it points the finger at the person holding the record and says, ‘What are you going to do?’

“Maybe we should stop focusing on the funeral march and start focusing on the younger generation. The problem is buried within layers of red tape and small print, but we don’t have to repeat it.”

l This year’s Reading Festival runs from Friday, August 25, to Sunday, August 27, at Little John’s Farm on Richfield Avenue. Kasabian headline on the Friday with support from Bastille and Two Door Cinema Club. Sunday’s headliners are Muse, with support from Liam Gallagher and Blossoms. Comedy headliners on the Alternative Stage are Bill Bailey, Simon Amstell and Katherine Ryan. For more information and to book tickets, visit www.readingfestival.com