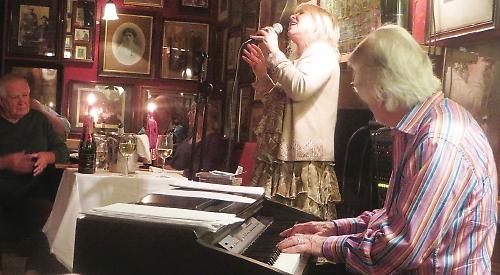 THOUGH tucked away in a quiet corner of the Oxfordshire countryside, such is the reputation of the Crooked Billet in Stoke Row that it draws a loyal clientele from far and wide to sample its unique rustic atmosphere, warm hospitality, outstanding cuisine, and world-class
after-dinner entertainment.

This time around the Newlands Lane pub welcomed the gorgeous and hugely popular combination of Tina May, a multi-award winner and one of the greatest female vocalists on the UK jazz scene, and Laurie Holloway MBE, the pianist, composer and arranger.

He is best known as the music director of the Michael Parkinson chat shows, as the writer of theme tunes including Blind Date, and for his musical partnership with his late wife, Marion Montgomery.

Laurie set the evening off to a swinging start with Blue Skies, exploring the Irving Berlin favourite in a variety of styles to display the full range of his dazzling keyboard skills.

Tina set the room aglow when she joined Laurie on Pure Imagination. This bright and breezy number from the pen of Anthony Newley and Leslie Bricusse famously featured in Willy Wonka and the Chocolate Factory.

The Gershwin brothers’ sentimental ballad I’ve Got a Crush on You brought a change of mood which continued in When the World Was Young and Autumn Leaves — two wistful, almost darkly nostalgic numbers, all the more moving for being sung with the original French lyrics.

An infectious boogie beat set feet tapping as Tina launched into the tale of Sweet Georgia Brown using her face, eyes, arms and hands to wonderfully expressive effect, so that no minor detail of the story should be missed. Marvellous fun!

All too soon the first set drew towards a close with You’ll Never Know, in which Laurie cleverly inserted As Time Goes By from the classic movie Casablanca. Nice Work If You Can Get It followed, segueing nicely into a fast paced Take the ‘A’ Train, which was rounded off with incredible exchanges between Tina’s vocal gymnastics and Laurie’s agile pianoistics.

The pair’s second set began with a medley of Lennon and McCartney tunes showcasing Laurie Holloway’s impeccable taste and invention at the keyboard — he truly is a
one-man orchestra.

Such skills, of course, are only acquired as the result of dedicated study and painstaking practice, as he then demonstrated under the watchful eye of Tina May, assuming the role of a piano teacher in the hilarious Practise Your Scales.

“Practise your scales, don’t bite your nails,” she exulted in her most Joyce Grenfellish manner, while her dutiful pupil only occasionally hit a wrong note.

At Tina’s behest Laurie recalled memories of working with some of the greats of the entertainment world, starting with Lionel Bart, a total musical illiterate, and yet he could produce Where is Love? — a song of sublime beauty which Tina delivered with heartbreaking tenderness.

Then there was the comedian Alan Sherman, whose You Gotta Have Skin, a parody of Peggy Lee’s cha cha hit You Gotta Have Heart, almost set the audience dancing given the May-Holloway treatment.

And Anthony Newley, for whom Laurie arranged I’ll Be Seeing You to include excerpts from Clair de Lune. Tina captured the moonlit quality of the song to perfection.

“Don’t ever play this when you’re alone at home,” Tina advised before I Keep Going Back to Joe’s — a brilliantly evocative lament of lost love set in the smoky atmosphere of a New York bar.

I Got Rhythm almost lifted the roof from the rafters and brought the show to a climactic ending with a fitting tribute to Ella Fitzgerald, the queen of popular song, whose 100th anniversary is “ellabrated” this year.