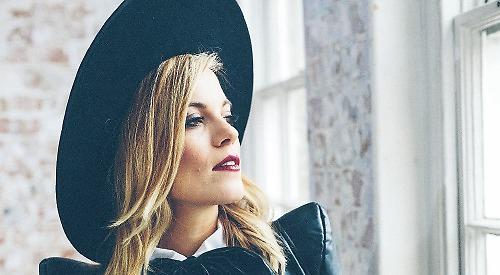 “I WANT people to listen to me as Mollie — Mollie Marriott. Not ‘Mollie Marriott, daughter of Steve Marriott’ — that wasn’t the name on my birth certificate.”

There aren’t many people who could survive 20 years in the music business before releasing their debut album, but Mollie Marriott is that rare exception.

The album in question, Truth is a Wolf, is due out on November 3 — shortly after which Mollie and her band will embark on a month-long UK tour as the special guests of blues rockers Bad Touch.

“Eagerly anticipated” and “long awaited” are stock phrases in the music promotion playbook, but for once they are no exaggeration.

Now 32, Mollie was just days from her sixth birthday when her father, the frontman of Small Faces and Humble Pie, died in a fire at his Essex home in April 1991.

Her mother, Manon Piercey, was later to marry rocker Joe Brown and when Mollie was 12 they moved from Hertfordshire to Henley, where she still lives today.

But despite relocating, Mollie made an effort to stay in touch with her old friends — some of whom she had already formed her first band, D2M, with.

“It was three girlfriends that I grew up with in Hertford — I moved here but it carried on,” she says. “Yeah, we got signed. We did a performance in front of Simon Cowell. He came to the studio that we were recording in. He was lovely to us, I have to say.”

Memories of the future X Factor supremo aside, Mollie is a little cagey about her first brush with the music industry — “I’m trying to step away from it!” — but admits that she was effectively a teenage pop star with D2M (short for “Devotion to Music”).

Not so very unlike her dad, who formed his first band at the age of 12 before going on to sing in Lionel Bart’s musical Oliver! in the West End, eventually appearing on the official cast recording album.

For her part, Mollie had her first record deal at the age of 13, with D2M going on to tour Europe and appear on Live and Kicking and the Nickelodeon children’s TV channel.

All without any stage school or other training on her part.

Despite the group’s matching outfits and other showbiz paraphernalia, Mollie was always serious about the music itself.

She and her bandmates even wrote their own songs in the style of Fleetwood Mac, only for the record company to rule that they were “too old” for the group’s target market.

Instead, some of Mollie’s other material ended up making it on to D2M’s records.

“And I was like ‘What? No!’ I was mortified. Totally mortified. And I tried to get away from it.

“It was very much of its time but I was never cool with it, even though it was of its time — I was never into it. And it caused a lot of problems — I was always known as the difficult one!”

“I never liked the music that we were doing, so I would turn up in a Motörhead T-shirt to do an interview, which used to really annoy everybody.”

Despite the tensions in the group, being a teenage pop star had its occasional upsides.

“I was working, staying at a friend’s house at Wheeler End Studios — my mum’s best friend used to run it and they’d have Robbie Williams and Oasis and all that lot up there.

“So we were up there and Oasis were in and I’d kind of been around them a lot and growing up with them, being at the studio all the time, and Liam and the producer Stan Kybert asked if I’d like to do a backing vocal on one of the songs that had the potential to be on Heathen Chemistry.

“So naturally I said yes and then afterwards went ‘Why did I say that?’ Mass panic. And then when I did it I had Liam staring at me through the glass of the recording booth.”

In a friendly way, hopefully?

“Oh yes, he was always lovely to me. I’ve got nothing bad to say about the Gallaghers — they’ve always been great to me. They’re very different characters but I love them both, I do — I think they’re both great.

Throughout her teens, Mollie had been combining her pop career with life as a pupil at Gillotts School. After completing her GCSEs she went to The Henley College to study music, technology and English literature — but ended up feeling out of place.

Building on her experience in the studio with Oasis, Mollie quickly established a career as a backing vocalist, going on to work with the likes of Proud Mary, Paul Weller, Mark Knopfler, Chas and Dave and her stepfather Joe Brown, among others.

Her fans in the music business include Peter Frampton, a former member of Humble Pie, who said: “They say the apple doesn’t fall far — it’s not surprising she has an incredibly soulful voice and is a great live performer. It’s been hard waiting for her first solo album to come out as I’ve known all along how important her voice is to be heard.”

Rolling Stones guitarist Ronnie Wood also gave his verdict, saying: “Strong song with a great voice — Mollie’s got it all.”

The sentiment was echoed by Radio 2’s Bob Harris, who said: “Infectiously vivacious, soulful and connected, Mollie is the real deal.”

Looking ahead to her album’s release, Mollie said: “I’m really excited. It features a lot of different styles and I think it really showcases my vocals. We had a lot of fun making the album and I hope people enjoy listening to it.”

The singer-songwriter collaborated with Paul Weller on the title track Truth is a Wolf and on another song, King of Hearts.

Closer to home, the lead single taken from the album, Control, was co-written with Sam Tanner, the lead singer with Henley and Reading band Brother Strut.

“Control is all about taking back control of my music,” says Mollie. “It was important, so this was the right single to start with. I’m in the driver’s seat, going where I want to go.”

l For more information on Truth is a Wolf and a full list of tour dates, visit www.molliemarriott.com