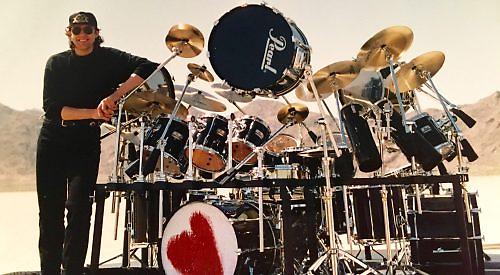 HE’S best known as the drummer who created that unmistakable military beat in chart topping hits such as In a Big Country, Look Away and Wonderland.

But as well as enjoying enduring success with Big Country, Mark Brzezicki has shared the stage with many musical legends in a career spanning more than 40 years.

As a session drummer, he has played with the likes of Pete Townshend and Roger Daltrey, of The Who, Midge Ure, and the Pretenders and toured with the Rolling Stones and Led Zeppelin’s Jimmy Page and Robert Plant.

Brzezicki was the drummer for Big Country from 1981 to 1989, their most successful period alongside bandmates Stuart Adamson, Tony Butler and Bruce Watson.

But in 2001 came the tragic death of Adamson, the band’s lead singer, who had been struggling with alcoholism for several years.

Big Country split up but reformed in 2007 for a tour, before reforming again in 2013 and releasing the album The Journey.

The band will be taking to the stage at Rewind next Saturday (August 19) and Brzezicki says there has been a real appetite for the band.

“After Stuart passed we were going to call it a day,” he said. “There was a big groundswell eight or so years afterwards of people wanting to hear Big Country’s music on the internet. So I contacted Tony and Bruce to say it would be good if we could do something, and it was kind of a mutual thing. The catalyst really was Mike Peters from The Alarm.

“We reformed with Mike singing and we needed the twin guitars so that was with Tony - and Bruce knew it was the right thing to do to get Jamie Watson in — Bruce’s son.

“He had been playing with his father who taught him the sound and all of the notes, so he continues with the twin guitars with Bruce. It really worked well.”

Butler then went back to teaching and Peters went back to The Alarm so they recruited Derek Forbes from Simple Minds before Hough joined.

“Simon does a great job with a lot of dignity,” Brzezicki says. “He doesn’t scream out to be Stuart or anything — he loves forming the songs and doing them justice. It’s very close to the original sound. It will never be the same without Stuart — but it’s the nearest you’ll get.

At revellers should expect a set-list full of their hits from their extensive back catalogue. “We’re celebrating the anniversaries of the many albums that we have out,” Brzezicki said. “The first four albums the fans tend to hang on to dear life and if you put anything new out, the audience goes quiet while they critique you.

“For now — not to say we won’t be writing songs — but for now, we’re happy to play from the catalogue.”

He added: “Rewind is great because it’s perfect for that sort of scenario – we’ll do all the hits, we tailor-make the show for that.”

Brzezicki is looking forward to catching up with old friends at the festival, having worked with Nik Kershaw, Howard Jones and Midge Ure previously.

“It’s a great atmosphere as well,” he said. “There’s something about the Eighties music — not to sound like I’m an old fogey — but there was a different way of writing songs. They were more song-driven in the Eighties, now they are more of a groove or a chant. You rely on the repetitiveness of the words but in the the songwriting produced very sing-along-able songs.”

For a band that’s known for having an original guitar sound, Brzezicki is “chuffed” his drum solo on In a Big Country is so instantly recognizable.

“That got voted the best drum track of the Eighties in a poll in America recently,” he said. “I was well chuffed. The intro is a little bit like when you hear EastEnders — you know what’s coming.”

Brzezicki came from a musical family and grew up listening to punk. He recalled: “My father had a book The Rudiments of Military Drumming and I just sat there and learned from it and that kind of affected my style. When I joined Big Country it kind of fitted perfectly, you know?

“When the band went together and I first heard the music from Stuart, I said that it reminded me of bagpipes — he hated that!

“But for me as a Londoner, it did remind me of bagpipes and it kind of led me into playing that kind of funky, rocky marching feel; I added a bit of spice with the marching drums which kind of emphasized that whole Scottish sound. I didn’t do it too deliberately but I was aware that it so well.”

During his there have been a number of highs, including living his childhood dream of being on Top of the Pops and playing at Hammersmith Odeon.

Brzezicki said: “Playing Barrowlands back in the day when we were really riding high in the charts was another high and also playing the Prince’s Trust All Star Rock Concert in 1984 or 1985 because I met Diana and Prince Charles. I was also very honoured to help close The Jam exhibition at the Echo Arena in Liverpool — they asked me because the original drummer pulled out.”

He added: “You’re only as big as your next hit and I’m very grateful that I am still able to work, you know, as we’ve all got older but it’s great that people just want to hear the music.”

• Big Country are playing at Rewind in Henley on Saturday, August 19. For more information and to buy tickets, visit www.rewindfestival.com