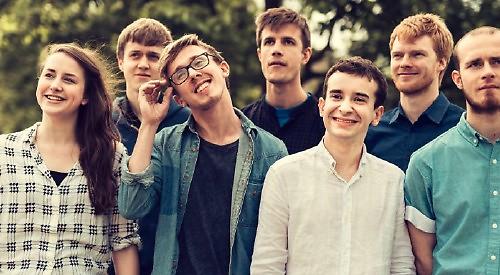 TOM SMITH will be leading his septet on to the stage of Reading’s Progress Theatre to open a new season of jazz next Friday (August 18).

A finalist in the BBC Young Jazz Musician of the Year Competition in 2014 and 2016, Tom’s talent on both saxophone and flute and his originality as a composer are already making a big impression.

On Friday, September 1, Two Of A Mind, baritone saxophonist Chris Biscoe and altoist Alison Neale, will bring the delights of Gerry Mulligan and Paul Desmond to the theatre, evoking a collaboration which produced the classic albums Blues in Time and Two Of A Mind in the late Fifties and early sixties. Tickets are £17 each (£15 concessions).

The band, completed by Jeremy Brown on bass, drummer Stu Butterfield and the guitar of Colin Oxley, will feature tracks from their recent album Then and Now, which includes arrangements from the original albums together with new compositions by Chris and Alison.

Another young saxophonist, Alex Hitchcock, has already played with many of the great figures of British jazz, such as Art Themen, led his own projects at Ronnie Scott’s and the Royal Albert Hall and performed to sell-out crowds at the 2016 London Jazz Festival. He will be appearing at Progress with his quintet on September 22. Tickets are £14 (£12 concessions).

Alex Garnett and Ray Gelato will rekindle their partnership on saxophone after an interval of 20 years when they appear at the theatre on October 27, supported by Gunther Kurmayr on piano, Manuel Alvarez on bass and drummer Matt Home. Tickets are £18 (£16 concessions).

Then Katya Gorrie and her band of troubadours open the Moscow Drug Club for one night only in the dark recesses of the Progress on November 24. Tickets are £17 (£16 concessions).

They will deliver a mix of jazz, Grand Guignol theatre, burlesque, sardonic humour and musical story-telling, from Johnny Mercer and Henry Mancini through to Tom Waits and Leonard Cohen.

For more information and to book tickets for these shows and to see a full events calendar, visit www.jazzinreading.com