'Musical similarities' are no joke for South sequel 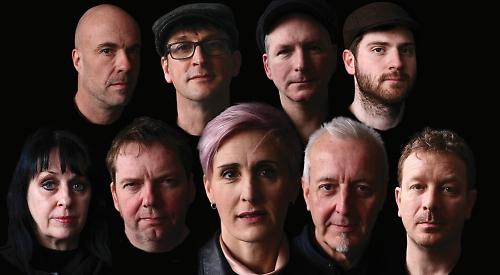 THEY famously split due to “musical similarities” but The Beautiful South spawned a sequel who 10 years on continue to delight the band’s many fans.

On Sunday (August 20), Rewind festivalgoers will be able to relive some of Paul Heaton and Co’s biggest hits when The South take to the main stage at Temple Island Meadows.

For her part, lead singer Alison Wheeler is planning to make a weekend of it.

“I’m going to Henley as a fan,” she says. “I’ve bought my ticket for the Saturday. I’m going just for fun because the line-up is great this year — I think it’s going to be a really great festival.

Alison, who was born in 1972, was still in her teens when The Beautiful South formed out of the ashes of Hull chart-toppers The Housemartins in 1988.

It was to be another 14 years before she joined their ranks, having in the meantime studied Japanese and law at Trinity College, Cambridge, before enjoying success as a singer with folk trio Virginia.

Alison says it was her time at university that rekindled her interest in music. So much so that she was eventually to abandon her studies to pursue her dream of being a singer.

“I joined a covers band and we had the most amazing time playing all these beautiful university balls and working with artists that I was admiring — D:Ream and the like — because they’d be on the same bill as you when you’re performing.

“And then it suddenly occurred to me during my four-year Japanese degree that I’d have to go and live in Japan for a year. I must say it did sway my decision to change subject so that I could stay in England and continue to sing.

“So I changed to law. And then I thought, if you really do know what you enjoy doing you’re one of the few fortunate people — and give it a go!

“So I left university, came to London, temped and tried to just knock on as many doors as I could — for years. Then seven years later a door finally opened when I joined a gospel choir and [Beautiful South co-founder] Dave Hemingway hired three of us for a session on his solo album.

“And that series of events was fortunate enough for Dave to say, ‘I think you’d suit The Beautiful South, would you like me to put you forward?’

“I was just really lucky. Everybody says ‘you’re so lucky’ but it was years and years of knocking on the door and the right time and the right place. It was a real fortunate break.”

Having got the gig, succeeding Briana Corrigan and Jacqui Abbott as The Beautiful South’s female vocalist, Alison was jokingly dubbed “The Lady” by her new bandmates — a reference to the perceived contrast between her Oxbridge education and their northern working class roots.

Having joined in 2002, she went on to record and tour three albums with the band before they went their separate ways in January 2007 — 2003’s Gaze, the 2004 covers album Golddiggas, Headnodders and Pholk Songs, and Superbi, released in 2006.

“Musical similarities” aside, and even with their having sold around 15 million records worldwide, Alison says she understands Paul Heaton’s decision to wind up The Beautiful South, however much of a shock it might have been at the time.

“It was definitely Paul’s band — Paul and Dave Rotheray. It was their creation, their music and their lyrics. He just decided he wanted to try something different and he didn’t think it was fair to keep us all hanging on, so he just said ‘It’s healthier if we just call it a day.’

“And it really was surreal because there wasn’t any animosity, it was just, okay, you walk out of the pub and that’s it. Okay! Back on the train. Back home.

“I joined relatively late, so everything was still shiny and new to me — anything that we were doing was exciting.

“They’d been together for so many years — the press and radio and TV performances were a bit run of the mill for them. But everything was so exciting for me — I was really, really sad when it came to an end.”

As it turned out, though, the band’s demise was eventually to prove something of a new beginning.

“Dave Stead, who’s the drummer with The Beautiful South, he kind of walked away from the finishing of the band and said it just didn’t feel right because that’s all he’d ever known, it’s all he’d ever done.

“He really didn’t want to stop. We appreciated that Paul wanted to call time on the band, but he suddenly thought ‘No, it doesn’t have to end!’

“So he approached us all individually and said ‘I still want to do this, are you interested?’ And that was almost six months after we split.

“Dave approached me and I was up for it, but I was pregnant at the time so we had to kind of put a stop on it until I’d had the baby at least. So it was two years from finishing before the band started touring.

“We kind of went through a number of name changes. We were The New Beautiful South, which we just didn’t think worked as a name. We finally settled on The South because most of the fans have always referred to The Beautiful South as ‘the South’ as an abbreviated reference to the band, so it just seemed a natural progression to call ourselves that.”

While the original band had numbered six members, The South expanded to a nine-piece, with Beautiful South singer Dave Hemingway joining Alison on vocals.

In 2012, four years after forming, the new line-up released an album, Sweet Refrains, featuring songs written by Butcher and Barton.

“It worked really well,” says Alison. “A lot of people compliment us on the album and how it fits well with the back catalogue. And honestly, if you put Dave Hemingway’s voice with mine it automatically lends itself to the style anyway because they’re such recognisable voices together.”

While Hemingway remains involved with the group, he announced his retirement from the live music scene earlier this year, prompting a reshuffle and fresh recruitment to the ranks of The South.

With Damon Butcher having moved to live in Ireland, experienced newcomer Andy Price has taken over keyboard duties.

But the biggest change has seen Gaz Birtles step into Hemingway’s shoes as the male vocalist opposite Alison, with long-time band associate Su Robinson joining on sax.

“Gaz has got the most amazing voice,” says Alison. “He’s sung in bands for years, you know, and he’s got a lovely tone to his voice — so I’m really looking forward to his baptism by fire at Henley!”

Following their appearance at Rewind, The South are embarking on an autumn tour that includes dates at London’s Islington O2 Academy on Saturday, November 4, and, closer to home, at Sub 89 in Friar Street, Reading, on Thursday, November 16. For tickets and performance times, visit www.thesouth.co.uk

For more information on Rewind, including the full festival line-up, visit www.rewindfestival.com