Festival chief's five things to watch out for at Rewind 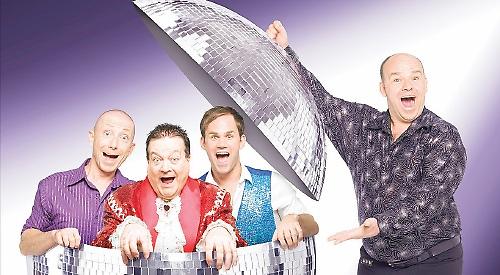 A feast of Eighties pop and more, Rewind returns to Remenham this weekend. Here the festival’s general manager PAUL CAREY suggests five things to keep an eye out for

REWIND is in its ninth year in Henley — at the fantastic riverside meadows opposite Temple Island.

Hundreds of Eighties-mad festivalgoers come to this beautiful corner of the world to enjoy one of the best weekends of the year right on our doorstep.

Living and working in Henley, it’s a privilege to create this event, each year picking the crème de la crème of the best acts from that unforgettable decade to entertain and spread happiness to thousands of people.

And of course, the sun always shines. Well, nearly always at some point over the weekend! With that in mind, here’s five things I think are going to make this year’s Rewind one of the best music festival experiences around...

1. Friday night welcome party with 4 Poofs and a Piano

Although the main stage acts don’t start until 2pm on Saturday, people arrive on site to pitch their tents on Friday when the campsites open at noon.

From 6pm on Friday the festival site’s Main Street opens and people with weekend tickets come on site and enjoy incredible food, stalls, the fairground acts and rides — and also we always have a welcome party.

This year the brilliantly funny 4 Poofs and Piano, who you’ll know from Jonathan Ross’s TV chat show, are performing and they’re brilliant. Lots of fun and just the right amount of kitsch to kick things off!

This year in Henley we’ve partnered with bed company Dreams to give Rewind South the biggest wake-up it’s ever seen.

At 1.45pm Mr Motivator (pictured) will take to the stage to put the Rewind faithful through their paces and warm up the crowds ahead of the first act on stage.

It’s going to be great and I’m sure the crowd will be donning their leg warmers and headbands in preparation.

The music starts at 2pm and from then until the fireworks that close the day it’s hit after hit performed by fantastic acts.

On Sunday we’ve got the brilliant British Electric Foundation and a very special performance from Kim Appleby who’ll be marking 30 years since Respectable hit number one.

One of the mainstays of Rewind is the silent disco. It’s one thing we daren’t even think about changing!

The sight of people dancing and singing their heads off with their headphones on their head is just brilliant.

Definitely worth checking out on Main Street once you get on site.

Gloria Gaynor (pictured) and Village People will be wrapping up Saturday’s entertainment, which will be brilliant. I saw Village People leading thousands of Rewinders at our event in Cheshire two weeks ago and it was just amazing.

YMCA and all the actions — people loved it. So watch out Rewind South, you’re going to love it too!

Gloria Gaynor has got so many great hits and with I Will Survive there’s a showstopper like no other to look forward to.

Status Quo (pictured) are one of the original rockers and we’re so excited to bring the event to a close on Sunday night with one of the biggest and best.

Hit after hit is guaranteed and it’s the perfect antidote to Saturday night’s discofest!

Our fantastic fireworks make the end of each day that extra bit special.

Once the curtain falls on Rewind 2017, we’ll take a quick breather and then start on the line-up for next year — there’s no rest!

We love it and we’re already cooking up some special treats for 2018’s festival, which will be our 10th anniversary in Henley.

There’s still a few tickets left on sale, so check out www.rewindfestival.com for full details and to book.