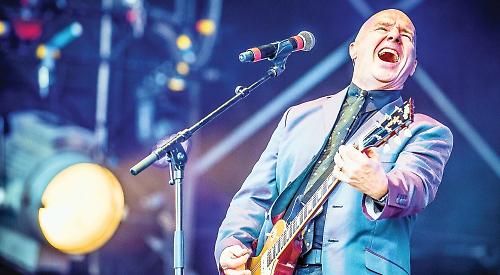 IT’S one of the landmark songs of the Eighties that’s sure to raise the roof if Midge Ure plays it at this weekend’s Rewind festival — even the bits that haven’t got a roof.

A pocket sketch of isolation, alienation and fear that was graced with a groundbreaking music video by Godley and Creme, Visage’s Fade to Grey is a synthpop classic that still gets played on the radio every day.

Originally released in 1980, recent years have seen it rack up more than 20 million views on YouTube.

The song is seen by many music fans as somehow era-defining, much in the way that Not Fade Away was for the Rolling Stones in the Sixties.

Ure, who went on to find greater fame as the frontman of Ultravox before hitting number one with his 1985 solo single If I Was, was one of three co-writers on Fade to Grey, but also produced it.

So what was going through his mind when he was working on the song with Ultravox and Visage keyboardist Billy Currie and their friend Chris Payne?

“It was a lovely instrumental piece when I first heard it,” he says today. “Billy was touring with Gary Numan’s Tubeway Army and he and the other keyboard player Chris used to jam this little piece of music at soundchecks.

“They recorded it when they finished the tour and they played me the piece of music and I just fell in love with it — I thought it was fantastic. So I wrote the lyrics and the top line melody to Fade to Grey and turned it into a Visage song.”

As produced by Ure, the track was also distinctive for featuring the same set of lyrics in English and French — with the latter being spoken by Brigitte Arens, Rusty Egan’s then girlfriend.

“She had this beautiful little accent and it just struck me that it would be really nice to have her read some of the verse lyrics in the mid-section of the song,” recalls Ure. “And of course this wonderfully sexy, you know, sweet voice. And it was great — it helped make the track, I think.”

Ure, who is playing the main stage on Sunday night at Temple Island Meadows, is looking forward to rubbing shoulders with a number of former bandmates and musical associates — not least original Sex Pistols bassist Glen Matlock, who is performing on the same day.

Their old sparring partner Rusty Egan will also be DJing at the event, with a Rewind spokesman saying: “We are delighted that our great friend Rusty Egan will be back at Rewind, keeping the party going between bands.”

With that in mind, what chance of Fade to Grey getting an airing alongside Ure’s solo hits and Ultravox classics?

“I think it will because it’s one of those songs, as you quite rightly pointed out — it was one of the songs of the Eighties. There are certain songs that when you get the opportunity to play them in front of a massive crowd like there will be at Rewind, you do it because everybody knows it, you know?

“Even if you weren’t around when Fade to Grey was a hit, you certainly know it retrospectively. You know it because of Eighties radio or it’s been in various films and adverts and stuff — so people know it!

“It’s weird because that song in Europe, in Germany in particular, every decade they have awards for the song of the decade — and I think for the last three decades we have won best dance record.

“It’s incredible! It keeps getting voted. Because it was one of the just kind of founding tracks that started the whole electronic dance movement.”

Ure has previously spoken of his musical debt to the likes of German electronic pioneers Kraftwerk, but it seems the synthpop-electronica explosion of the early Eighties also had its roots in punk’s DIY ethos.

“The whole thing about being a punk band was, you’re not an expert guitar player or an expert drummer. You get out and you do it.

“Most of the kids who bought synthesisers had no idea how they worked, so that’s why you’d see Depeche Mode on television using two fingers simply to play a bass part or whatever.

“We all did that! We’re all claw-hammered, we’re all claw-fingered playing three notes in a chord, because none of us were really keyboard players — only a handful were properly, you know, trained.

“The naivety had a massive part to do with the quality of what was being done at the time. Sometimes by not knowing what you’re doing you can come up with some really interesting stuff!”

This enthusiasm for electronica is the theme of Ure’s upcoming autumn tour of the UK — which includes dates in Oxford and High Wycombe on Tuesday, October 17, and Wednesday, October 18, respectively.

“It’s a tour with The Christians and Altered Images,” he says. “I’m topping the bill, so I get to do a full set, which is nice. I’m doing an hour and 20, an hour and a half or whatever it is, revisiting things like Visage and Ultravox and more contemporary solo stuff.

“I’m getting my teeth into it now because it takes so long to put something like that together. Just even for 40 dates it takes a couple of months to get the sounds and programme the computers, because all the sounds come from computers these days — you don’t take out all the synthesisers that Ultravox used to.

“A laptop will now generate all the sounds you want. You still have to play it!” he laughs, “but you can do it with a couple of keyboards and a couple of laptops now — as opposed to the travelling music shop that we used to go around with.”

With the gear involved having shrunk down so much in size, it suggests that in future we might see Rewind artists on stage equipped only with a smartphone — perhaps not quite the spectacle that some fans of the period are looking for?

“It’s soul-destroying for people who are aficionados of the synthesiser because they want to see you on stage with the same one you used 35 years ago and, of course, that’s just ancient technology now — they’re just electronic bricks.

“It’s like saying to someone ‘I don’t see why you’ve got an iPhone, why haven’t you got a Nokia from 15 years ago?’ You think ‘Well, I don’t want that — these things do so much more.’ But there we go.”

Equipment aside, with so many chapters of his career to cover, does he have a particular story he’d like to tell when he comes to Henley?

“I think the Rewind concerts cover a very specific era. It’s not like going out and playing in front of your own crowd. It’s a crowd of the curious, you know? They’re there to have fun and get dressed up and have a laugh.

“But saying that, it’s always an absolute joy, you know? There’s something really quite nice about just wondering on for half an hour or 40 minutes or whatever it is you’re doing and just playing hit after hit after hit — and seeing that sea of people singing along with all your songs.

“You’ll see me on stage with a smile on my face because they’re just an absolute ball to do.”

l Midge Ure plays Rewind on Sunday. For more information, including the full festival line-up, visit www.rewindfestival.com. For a full list of his autumn tour dates, and to book, visit www.midgeure.co.uk