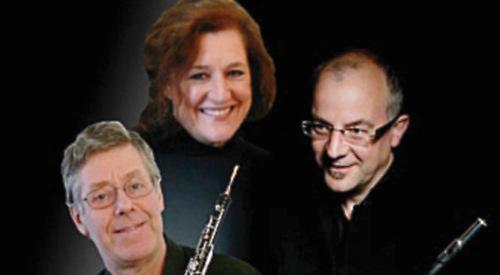 HOW fortunate we are to have such excellent musicians living in this area.

A good crowd enjoyed an evening with the Syrinx Trio on Saturday as part of the Hambleden Summer Concerts series at the Church of St Mary the Virgin.

Michael Cox and Richard Simpson, respectively the principal flute and oboe of the BBC Symphony Orchestra, were joined by Janet Simpson, pianist and former principal keyboard of the Halle Orchestra.

On a night off from the Royal Albert Hall, and in contrast to the heavy symphonic repertoire of the BBC Proms season, the Syrinx offered a light programme of trios and duos from the 17th to the 20th centuries.

The varied and multi-national repertoire was introduced with interesting anecdotes by the players.

The varied programme was engaging and showed off the skill of these highly accomplished musicians, who were equally at home with the technically demanding fast passages of the Vivaldi, as with the relaxed jazz style of the Planel.

This was a tight ensemble — what you get when the players know each other well.

The range of compositional styles evident in Malcolm Arnold’s Sonatina for oboe and piano demands a versatility from both players.

Richard and Janet Simpson set the scene in the opening movement, the whimsical Leggiero, then the beautiful melody of the Andante with some captivating long-held notes in the oboe and a lively Vivace to finish.

There was some extraordinary playing from Michael Cox in the Hungarian Fantasie, with each phrase well crafted. Light, playful, fast passages contrasted with agile bursts of sound and pauses mid-air, and then trickles of notes fading to nothing. This was a piece of theatre.

We heard some lesser known works too, including a selection of the enchanting miniatures for flute, oboe and piano by the African-American composer William Grant Still.

The melody passing back and forth from the oboe to the flute was simple but beautiful. This was all such good playing and really enjoyable.

The recital ended with arrangements of three of Brahms’s Hungarian Dances — a real crowd-pleaser — and we were sent home smiling with an excerpt from Walton’s Facade as an encore.

The last of the 2017 Hambleden Concerts features the Blaenavon Male Voice Choir on Saturday, September 2.